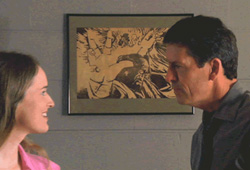 My heart hurts. Several earnest attempts at describing “Sleeping and Waking” make me feel like I’m writing the parable of the Howitzer and the Gnat. (Sound of crumpling paper here.) Dreadful and grave, this first feature by a playwright and director of theater and opera attempts to answer big questions about life in a story of Sullivan Daniels, a character who undergoes experimental surgery to survive a terminal disease. Somehow, the press kit, not available to the general public, captures a similar tone of deluded awfulness: “A drama with sparks of wit and warmth, ‘Sleeping and Waking’ is the story of a man, an accomplished artist and teacher, whose paintings and woodcuts reflected his deep religious faith, a faith of certainty beyond question.” Let us rummage deep, down the bottom of a sack of WTF? “By the end of the 25-day shoot, the company had more than 28 hours of brilliant high definition footage, which was immediately transferred to the edit bay.” Um, no.  I’m honestly flummoxed by almost every choice on screen, from design to composition and certainly in performance style: this is banality that cannot roust itself to be merely drab. I’d be far less annoyed by time spent watching “Pissing and Shitting.” Ordinariness deserves better. For connoisseurs of failed theatrical adaptations only. 92m. (Ray Pride)