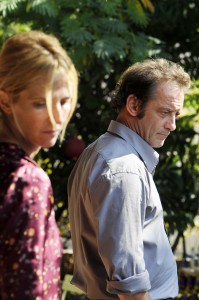 The job of movie reviewing is filled with shortcuts and shorthand and surmise. You know a name, a face, the movies that came before, you’ve heard the rumors about a new movie, you’ve read a review, accidentally, not on purpose.

Even at film festivals with four-a-day viewing schedules, it’s seldom there’s a movie I don’t have some shred of a hint of an inkling of. There are very few surprises, for worse, or for better. One of the rare occasions I was entirely in the dark was on a three-screening Thursday a couple weeks back, where a pair of annoying, unsatisfying misfires made me restless and headachy. Then, “Mademoiselle Chambon.” Then… wow.

No clue. French? That seemed a safe bet. The sixth feature by writer-director Stéphane Brize (adapted from a novel by Eric Holder) unfolds with simplicity and directness. Jean (Vincent Lindon, “La moustache”) is a contented man, a construction worker, slightly confused and diffident, possibly simple. His lovely wife Anne-Marie (Aure Atika, “The Beat That My Heart Skipped”) and he dote on their child, trying with some effort to teach him lessons they themselves seem never to have learned. Visiting his son’s classroom, filled with absolutely darling children, Jean meets his teacher, Veronique Chambon. (If I’m not mistaken, no one ever addresses her as “Mademoiselle Chambon.”) She’s played by Sandrine Kiberlain (“Seventh Heaven”), who, I learned afterward, is Lindon’s ex-wife. This little bit of knowledge informs how the two actors manage to convey such tentative intimacy. She’s a freckled blonde of a certain age without makeup, attentive, calm, somehow sad. Lindon’s level, expressive eyes manage not to reveal the temperature of his emotions. We see him at construction sites, tending tenderly to his elderly father, running errands. The sound design says more than Jean does: the squeaky shoes of a casket saleswoman showing wares to the father is the creepiest thing in that scene, and elsewhere, the sounds of the world outside are alternately pitched and damped.

A series of transactions lead to Jean and Veronique coming closer to one another, but their growing attraction is expressed almost entirely without words. A bit confounding at first, but once the story’s dynamics reveal themselves, the effect, oddly enough, is like an Eric Rohmer movie without words. His characters might go on and on about an unattainable woman, an untouchable knee, yet in Brize’s stripped-down telling, the language is gestural. It’s not inexpressible want, but simple stirrings that have not risen to words. Bold, yes, and very French. Brize also lets his camera rest on the backs of observers, taking in necks, collars, not to the extremes of a director like Bruno Dumont, but in brief reverse shots, carrying the weight of the characters’ growing temptation. Lindon’s back carries the weight of his small world as he trudges up stairs: there’s no need to say more.

The framing is immaculate, in shots both close and far, with elements of rooms and streets unexpectedly inflecting the foreground interactions. It’s environment as psychology or even psychoanalysis: quiet, ever-present, ever-critical. In the most spare of Brize’s frames, he’s as exacting as a painter. While his ambitions toward simplicity might evoke Dreyer or Bresson, his film works as canvas. Painters or paintings I love seemed to pop from the elegant compositions. Simple diagonals in the background of widescreen images with two faces in front have the piercing simplicity of California’s Richard Diebenkorn, and it’s hard not to compare his studies of the shoulders, neck and gathered blonde hair of Kiberlain to Gerhard Richter’s study of his beloved daughter, “Betty,” face turned away, dynamic in repose. Still frames of cinematographer Antoine Héberle’s interior compositions would likely also show a rich appreciation of how Vermeer looks at space: simple, with only enough ornamentation to augment the drama in the foreground, and with a nourishing, late-afternoon light that suggests calm and pensiveness at once. There is a shot of Veronique in her apartment, listening to her answering machine while Jean, parked on the street below, leaves a halting message. She is in the center of the wide horizontal frame, with translucent white curtains behind her profile. To the right, there are the beige curtains at the window that shelter her from Jean’s view, and to the left, a painting of a woman’s profile, framed acutely, razoring all but the nose and brow of the figure. He’s a man who builds walls, she is a woman caught between curtains of contemplation. Those words make the film sound terrible: in concrete images, “Mademoiselle Chambon” is delicate, tender, tentative and altogether awe-inspiring. The extended penultimate traveling shot is a gentle, piercing lesson in how to depict domestic life, the persistence of forgiveness in practiced domesticity.

“Mademoiselle Chambon” opens Friday at the Music Box. The U.S. trailer is below.