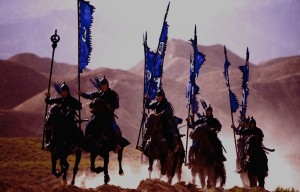 Some ideas sound too good to work when you splice cultures. You hope for a butterfly, you get something to make Dr. Frankenstein giggle. The mad heights of cultural transposition may have been scaled with Zhang Yimou’s latest, “A Woman, A Gun and A Noodle Shop,” which takes the core elements of a story set in a Texas backwater in the 1980s and shifts them to a desert town near the Great Wall of China. The prolific Zhang Yimou, who began his career as a cinematographer, directed films with political implications like “Red Sorghum” (1987) before, over the decades, turning his skills with color and visual dynamics to slashing action films like “Hero” (2002) and “House of Flying Daggers” (2004) and the choreography and mounting of the often-majestic 2008 Beijing Olympics opening and closing ceremonies. (Zhang had the command of budget and resources to outstrip even the imagination of James Cameron in a sustained fever dream.) Eccentrically enough, Zhang’s latest tale of dust in the whirlwind is a remake of the Coen brothers’ murder-with-twists 1984 neo-noir “Blood Simple.” With patches of action that hold the eye, and rigid visual design that matches the Coens’, the result is modestly Dadaist, like prose put into Google Translate, say, from English to Romanian, from Romanian to Dutch, from Dutch to German and back to English again. Cultural difference piles up: is this really the kind of material that can be redecorated with the trappings of Chinese opera? The gaudy costumes come as a relief, a pattern to look upon while the characters make startled expressions that suggest comedy is in the vicinity. There’s still a chain of misunderstandings at the center of the story, but the farcical level of the performances suggest Zhang has made a movie for an audience far from these shores. With Sun Honglei, Xiao Shen-Yang, Yan Ni. 95m. (Ray Pride)

“A Woman, A Gun And A Noodle Shop” opens Friday at Pipers and Landmark Renaissance.