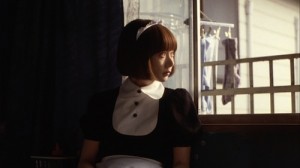 “Amelie” as sex toy and the cultural divide once more: why is Japanese poet of melancholy and remorse Hirokazu Kore-eda (“After Life,” “Nobody Knows”) making a movie like “Air Doll” (Kuki Ningyo, 2009), a variation on fairytales, a porny Pinocchio? In American culture, “Lars and the Real Girl,” a movie wrongfully much-praised for its depiction of loneliness, comes off largely as a bummer rom-com between Ryan Gosling and a sex doll. Simply pathetic. Wrenchingly discomfiting. But within the byways of the Byzantine Nipponese world, “virtual girlfriends” are in the culture. Apparently, there is an entire generational subset of hikikomori. Men who never leave their house. Men who never leave their sallow fantasies. With that background, there’s something more wistful, hopeful about “Air Doll.” All the existential straining of “Lars” plays out with greater weight. It doesn’t hurt that the figure of desire is embodied by the charismatic-even-when-standing still Du-na Bae (“Sympathy for Mr. Vengeance,” “The Host,” “Linda Linda Linda”) and that the cinematographer is a maker of some of the most luminescent and tactile of contemporary images, Mark Lee Ping-Bing (the almost inutterable beauty of “Millennium Mambo” and “The Vertical Ray Of the Sun”; collaborating with Christopher Doyle on “In The Mood For Love”). Poetry and beauty collide dreamily. “Based on the original graphic novel ‘Goda’s Philosophical Discourse, The Pneumatic Figure Of A Girl’ by Goda Yoshiie.” With Arata, Itsuji Itao, Jô Odagiri, Sumiko Fuji, Tasuku Emoto, Mari Hoshino, Ryo Iwamatsu, Tomomi Maruyama, Miu Naraki. 125m. (Ray Pride)

“Air Doll” opens Friday at Facets. A trailer is below.