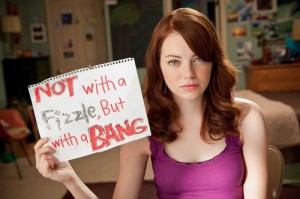 Olive Penderghast (Emma Stone) in Ojai, California has it easier than Sakineh Mohammadi-Ashtiani, the Iranian woman sentenced to death by stoning for adultery. Olive is merely ostracized in “Easy A,” a teen sex comedy where the only premarital playing around is comic-pretend sounds of sex. This rather verbal virgin may not start the rumor she slept with a frat boy but she opts not to stop it. She undertakes a science-fair project of sorts: what’s it like to get noticed in her high school? Reading “The Scarlet Letter” in English class, Olive relates to the Hester Prynne character in this 1850 novel by Nathaniel Hawthorne. Shamed in a puritan village in Massachusetts, Hester wears an “A” for adultery sewn to her dress. Not for extra credit or an easy grade, Olive flaunts her new reputation by sewing her own “A” onto her new, uncharacteristically risque outfits. She self-markets her disrepute by taking gift cards from male classmates—starting with a bullied gay—who are in desperate need of rumors they scored with Olive. Director Will Gluck (“Fired Up”) and writer Bert V. Royal offer a smart entry into a genre not known for booking it. Making female virginity an issue for seniors in a California high school, however, may be anachronistic. One apt throwback to Hawthorne’s voice—his narrator is “disinclined to talk overmuch of myself and my affairs”—is Olive’s webcam on her laptop, her way to narrate her slutty infamy and image makeover via the internet. Adults get terrific material here. Stanley Tucci and Patricia Clarkson play Olive’s parents Dill and Rosemary, who put watching “The Bucket List” on their own bucket list. Thomas Haden Church plays Olive’s English teacher and Lisa Kudrow plays his wife, the high school guidance counselor. For extra credit, cinematographer Michael Grady turns in a few long shots that are a treat to find in a genre that typically confines two-character scenes in tighter views. With Amanda Bynes, Alyson Michalka, Penn Badgley, Cam Gigandet, Dan Byrd, Malcolm McDowell and Fred Armisen. 90m. (Bill Stamets)