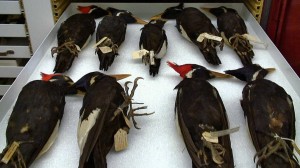 Scott Crocker’s wondrously paced “Ghost Bird” is a luscious, ambient documentary about absence, the hope for a presence, the death of a bird, the death of a planet. It’s haunting and bittersweet and if you think about it closely enough, tragicomic. An industry has been built up in the wilds of Brinkley, Arkansas over reported sightings of the Ivory-Billed woodpecker, a species that’s been extinct for over fifty years. Species as-yet-never-to-be-discovered supposedly go extinct every day of the year in the diminishing rainforest, but Crocker (and cinematographer Damir Frkovic) provide ample evidence of the manifestations of the human species. When a region adopts a mascot that doesn’t exist, wistful reflections come naturally. As Crocker told Canada’s National Post when “Ghost Bird” debuted at Toronto’s HotDocs in 2009, “As I came to learn more about the bird, it became almost like a mirror for how we interact with the natural world and how our footprint has continued to grow and stomp out species like the Ivory-bill. Imbued in this iconic bird are our hopes, our fears, our failures.” His movie tells the same tale, cleanly, mournfully, gorgeously. “Ghost Bird” is whip-smart, Errol Morris-smart. “You can never prove it doesn’t exist”: the simplest well-there-you-go in the movie may be its existential heart. The eclectic score includes new music by cellist Zoë Keating, The Pixies, The Black Keys and The Black Heart Procession. 85m. (Ray Pride)