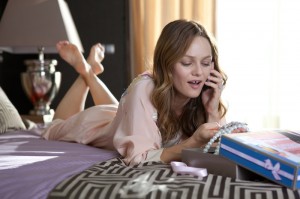 (L’arnacoeur)  We make sitcoms and sometimes romcoms, but the French, they turn out romantic comedies, and how many of them star Romain Duris? In “Heartbreaker,” the shaggy-maned, shaggy-browed, slow-burn-smiling Duris plays Alex, a professional anti-gigolo, a man paid to break up couples, with ever-grateful women his reward, as we learn in the at-a-running-start pre-credits sequence. A box-office success back in France, Pascal Chaumeil’s successfully contrived comedy pits Alex against winsome, gap-toothed Juliette (Vanessa Paradis), an heiress whose father (Jacques Frantz) wants her free of the man she’s set to marry in ten days. It’s high concept, sure, but there are few diversions and distractions. Once the premise is set, the frisky, slightly risqué play, set against the brightly colored backdrop of Monte Carlo (shot with gloss by the great Thierry Arbogast), is all smiles, matched eyelines and the giddy turning of tables. The quantity of jokes that charm is gratifying; Duris’ study of “Dirty Dancing” to emulate Patrick Swayze is a particular treat. It doesn’t hurt that the slight Duris and the slighter Paradis make a compact but believable, eminently charming pairing. 109m. (Ray Pride)