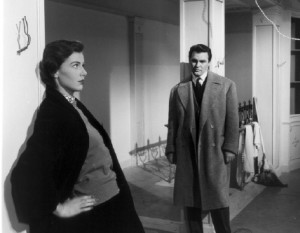 When is an artist the artist we discover them to be over the course of their career? The perverse pop-art of Michelangelo Antonioni’s 1970 “Zabriskie Point” is plainly the work of his Swinging London “Blow-Up” (1966). His exploration of urban space and the distances between alienated, contemporary characters is also recognizable as the same author’s work, in movies like “L’eclisse” and “L’avventura,” black-and-white dissections of time, architecture and thwarted desire, lovingly collated and anatomized in Criterion DVD editions. But Michelangelo was likely Michelangelo even as a babe, you’d guess from the restored 35mm print of his 1955 “Le Amiche” (The Girlfriends), a rare adaptation from the filmmaker. The acting is more emphatic, the melodrama of a 1950s Italian cast, but yet… men and women, exceptionally striking women, enact roundelays of attraction in mid-century modern settings. All the ache and isolation of the movies to come are there, and hardly in germinal form. The mysteries of solitude already transfix Antonioni, and even a twenty-first-century audience should be able to recognize a great film from an already-formed sensibility. Adapted from a novella by Cesare Pavese. With Eleonora Rossi Drago, Gabriele Ferzetti, Franco Fabrizi, Valentina Cortese. “Le amiche” comes from ambitious young distribution company The Film Desk: urrà for cinephiles! (Ray Pride)

The 35mm restoration of “Le Amiche” plays Saturday-Monday at Siskel.