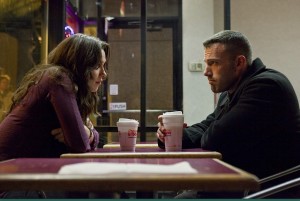 Crooks, cops, dames, family and neighborhood are generic ingredients in crime plots dating back to the 1930’s entertainment from Warner Bros. Ben Affleck belongs to a new school that goes all urban-anthropological in thrillers set in Boston neighborhoods. The born-in-Berkeley, raised-in-Cambridge writer-director depicted Dorchester in “Gone Baby Gone” (2007) with local color of faces, stoops and taverns. Charlestown gets the same treatment in “The Town.” This time out Affleck edits an oral history-style montage of quotes, including one from the diehard resident who observes, “It ruined my life, literally, but I’m proud.” Both films respect the ingrained brigand legends, mean street codes and persecution complexes, whether linked to Catholic penitence or federal penitentiaries. Screenwriters Peter Craig, Aaron Stockard and Affleck adapt Chuck Hogan’s 2004 novel “Prince of Thieves” for a solid B-movie starring director Affleck as Doug, the leader of a four-man team that dons skeleton and nun rubber masks to rob banks and armored cars. Doug’s struggle for a good-enough life beyond his day job at the gravel pit revolves around bank manager, one-time hostage and new sweetheart Claire (Rebecca Hall, “Vicky Cristina Barcelona”), Doug’s brother-like co-robber Jim (Jeremy Renner, “The Hurt Locker”) and FBI Agent Frawley (Jon Hamm, “Mad Men”) on their trail. This hardguy goes stubble-to-stubble with Doug and grouses to his own team, “We’ll never get twenty-four-hour surveillance unless one of these idiots converts to Islam.” “The Town” opens with a startling statistic about Boston’s 300-plus holdups per year, and the one-square-mile the hold-uppers call home. The long, though never dragging film ends with this inane backpeddler of a disclaimer: “Charlestown’s reputation as a breeding ground for armed robbers is authentic. However, this film all but ignores the great majority of the residents of Charlestown, past and present, who are the same good and true people found most anywhere.” Yeah, but those “good and true people” aren’t nearly as fun to watch as the Charlestowner who gelds a florist with his handgun after hitting the cash room at Fenway Park. With Blake Lively, Titus Welliver, Pete Postlethwaite, Chris Cooper and Currency Counters by Giesecke & Devrient America, Inc. 130m. (Bill Stamets)