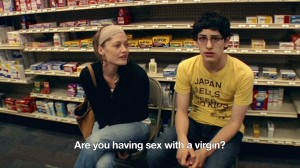 Four teenagers in New Orleans, and not in school it seems, start a rite of taking hits from a bong whenever one of them loses his virginity. Ten months later, only Matt (Matt Bennett) is scoreless. His fat loud jerk friend Zack (Zack Pearlman), coming off the same comedy shelf as Seth Rogen and Jonah Hill, brags: “I’m going to do to your viginity what Alfred Hitchcock did to birds.” That makes no sense, but it does justify the video-vérité style of “The Virginity Hit” where most cast members share the first names of their characters. The writing-directing duo Andrew Gurland and Huck Botko concocted better conceits for an omnipresent lens in their prior simulated doc features “Mail Order Wife” and “The Last Exorcism” (the latter of which they scripted and did not direct). Zack tries to equip Matt with come-ons that backfire. One woman gets out of the mood fast when she stops to ask Matt: “Why would I need the taste fucked out of my mouth?” This teen sex comedy spins off its own insider teasers as Zack posts Matt’s misadventures on YouTube. What drives the party-hard plot towards the fourth stoking of the bong is only a compulsion to shoot more video. Matt is not especially horny or heartsick. Ditto for his designated cherry-popper Nicole (Nicole Weaver), an alleged virgin too. Doing stupid stuff to draw hits on the internet is the dubious impetus to do and shoot most of what happens here. But that’s good enough for Matt’s on-camera pals and the film’s off-camera producers Will Ferrell and Adam McKay, co-founders of the online comedy site Funny or Die. With Jacob Davich, Justin Kline, Krysta Rodriguez, Harry Zittel, Savannah Welch, Sunny Leone and John McLeaish as the wacko hotelier. 87m. (Bill Stamets)