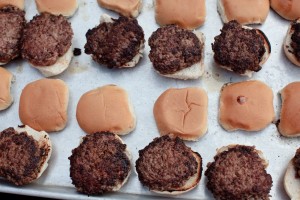 If films like “Super Size Me” just leave you salivating, wishing you too could indulge in the greasy goodness of fast food, there’s a festival that will satiate your appetite and entertain you with quality food films, though perhaps a little less negatively portrayed food.

In its fifth year running in New York, the Food Film Festival is making a new home out of Chicago this year. George Motz, co-creator and director says that, as it was in New York, the first year will run as an exhibition, while future festivals will be competitive. This allows for more control in the films shown for the first year, and helps to get the name out.

“We were trying to find a way to create menus that would work, for the first year. [It was a kind of] best of films and best foods that go with those films,” Motz says.

Motz made a film about hamburgers, called “Hamburger America,” which later became a book. That’s when his friend and eventual co-creator, chef Harry Hawk, stepped in with the idea to make the burgers that were featured in the film, so the audience would be able to eat what they were watching.

“People like to know where their food is coming from. And when you can watch a documentary about the food and where it’s coming from […] that makes for a very sound multi-sensory experience,” Motz says.

The festival attempts to keep films and food subjects national and international, rather than focus solely on the city it’s occurring in, but they enlist the help of local chefs, asking them to put their own spin on foods found in the films.

“It gives the local chef a chance to play with something they’ve never had the option to play with,” Motz says. (Lindsey Kratochwill)