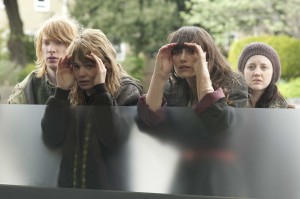 Readers of Kazuo Ishiguro’s “Never Let Me Go” really seem to like or loathe his novel. Early reviewers of Mark Romanek’s film adaptation (from a script by Alex Garland) really seem not to understand what’s in front of them. More a mirror than a landscape, the story, of three friends since childhood who grow up to be played by Carey Mulligan, Andrew Garfield and Keira Knightley, unfolds in a sylvan, parallel version of 1970s England. But their cool, extended triangle of desire is not the real romance. The real romance is of ideas. “Never Let Me Go” simmers and steeps in melancholy, but its quiet suggestiveness leaves many elements up for interpretation, leaving us to wonder, why do they take certain things in their lives for granted, but why do we, as well? I don’t know how long a list you might make. For one, there is an element about personal surveillance the characters do by rote. Don’t we, as a general populace, do that in cities and offices and factories and airports? The characters, we know early on, are groomed for a certain fate. Duty is inculcated, destiny is accepted. “Why do the characters not run from their certain end?” some have asked, citing implausibility in a movie that is much more allegory than simple romance. They’ve learned legends and live by them, however true, however false. They have their own belief system that allows them to move forward, and its elemental grasping for hope is as simple as the comforts of religion. Questions about factory farming and the failed system of health for profit may also be sparked. What’s on screen is hardly as bleak as these gentle creatures hope and dream: it’s a tender telling of what Don DeLillo once called “the fallen wonder of the world.” The settings are worn, props and clothing are lush from wear: the dignity of things that will outlive them; us. “Never Let Me Go” is exquisitely thoughtful, a reflecting pool of our daily lives. With Sally Hawkins, Charlotte Rampling, Nathalie Richard, Andrea Riseborough. 120m. (Ray Pride)