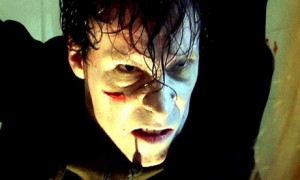 How low can a budget go before there’s no film there? Compact zombie entry “Colin” got its first notoriety in the UK as being the “$75 Zombie movie,” its reported budget. Writer-director-editor-sound designer-producer Marc Price called in more than a favor or three, to be sure; the claimed outlay was only for “a crowbar, red food coloring, a couple of tapes and some tea and coffee to keep the zombies happy,” while his Facebook-cast roster of extras ran to a hundred and his head makeup artist had just come off the set of “X-Men 3.” Treading on Romero territory, including “Martin,” Price still manages to make his camcorder enterprise into a horror movie that manages to be touching in a few of its less shabby moments. After a bite, teen Colin wakes to find himself turned and we witness suburbapocalypse through his jaded eyes. Handheld and grainy, and rude and crude, to be sure, but “Colin” is a decent calling card, for say, Price’s $7,500 movie to come. 97m. (Ray Pride)