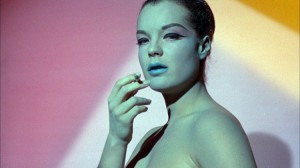 In the 1992 debut issue of the invaluable film journal Projections, edited by John Boorman and Walter Donohue, they asked veteran directors what they would do with unlimited resources. “In such Draconian conditions, it is I am sure,” Costa-Gavras said, “impossible to be able to choose a subject or to direct a film.” Mike Figgis: “What a terrifying idea.” Paul Verhoeven suggested that “you can make any movie you want for a realistic budget—minus ten percent.” There is beauty and terror in the documentary “Henri-Georges Clouzot’s ‘L’enfer’,” in which the insomniac, perfectionist director of French standards like “Diabolique” and “Wages of Fear” set out on a dream project with enormous resources in 1964 and then proceeded to go stark-staring mad, never assembling his lush, peculiar footage, meant to capture the process of mental disintegration, into anything resembling a feature. It’s a creative nightmare. Through a stroke of chance involving a stalled elevator, directors Serge Bromberg and Ruxandra Medrea were able to sift through fifteen hours of boldly imagined widescreen footage in 185 cans. Among the interviewees are Costa-Gavras, who was a crew member on the doomed production. Actress Romy Schneider makes a compelling object of desire and extended traveling shots of Serge Reggiani stalking her are breathtakingly lovely. What was in his mind, aside from “Vertigo” and “8 1/2”? We’ll never know, but the surviving images haunt. With Catherine Allégret, Bérénice Bejo, Jacques Gamblin, Serge Reggiani. 102m. (Ray Pride)