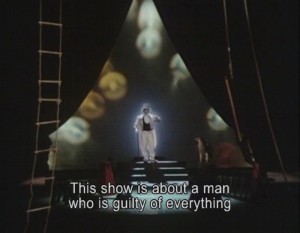 When Francis Coppola “presented” Hans-Jürgen Syberberg’s mammoth, 442-minute 1977 “Hitler: A Film From Germany,” roadshow-like limited runs were the rule, and Coppola retitled the film “Our Hitler.” Syberberg’s musings on the use of abuse of perceptions of the meaning of Hitler are more German than universal and more Syberbergian than something that gained footing in its culture. Still, there is one filmmaker who took from the use of rear projection and shafts of light suggesting the bright cone of white that comes from projected film: even on the not-very-good U. S. DVD transfer, it’s evident that Quentin Tarantino and cinematographer Robert Richardson consulted “Hitler,” and the sequence of the apocryphal cinema-set killing of Hitler draws lovingly from this film. For most viewers, the slog of repetition, narration and monologue will soon grow tiresome, but there is a fierce intelligence at humorless play. As was the case with his staunchest defender, Susan Sontag, who considered Syberberg “the first film director since Godard who really matters.” Defending her extended essay in The New York Review of Books, Sontag wrote on of the “complexity of Syberberg’s views, and their formal and imaginative profundity.” She continued, “The subject of Hitler makes moralists of us all—moralists with a facility that is perhaps the last of the corruptions which is Hitler’s legacy.” It may be profitable to see how Syberberg’s 1970s explorations resonate against the work of “moralists” today. 7 hours, 22 minutes. (Ray Pride)

“Hitler” A Film From Germany” shows twice Saturday and once on Monday and Wednesday at Siskel. A video adaptation of Susan Sontag’s NYRB essay about the film is below.