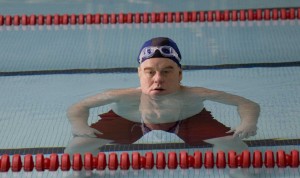 Hoffman floats. In his feature directorial debut (he’s directed several original productions in the theater), Philip Seymour Hoffman has chosen to adapt Bob Glaudini’s “Jack Goes Boating,” which he had also acted in and directed off-Broadway. While the battles between two working-class New York City couples have the intensity of a stage production, Hoffman shows assurance as a craftsman, deploying production design, color, sound and music in deft fashion. Thérèse DePrez’s dressing of apartments and offices is especially apt. Hoffman’s Jack is friends with Clyde and Lucy, played by John Ortiz and Daphne Rubin-Vega. Jack and Clyde are limo drivers with different ideas about how to attain their dreams. Lucy works at a funeral home, along with Connie (the radiant Amy Ryan), whom Jack meets and likes, but these two grown-ups need time to work beyond past failures. Clyde and Lucy are in the course of detonating as the new couple fumbles forward. Hoffman, hailing from Buffalo, continues a fruitful exploration of the snowy, sometimes bleak reaches of New York state, having acted in “Synecdoche, New York” and the Buffalo-set “The Savages.” (There’s also “Capote,” although its period-set New York City scenes were shot in Winnipeg.) While the acting is both emphatic and empathetic, with Ryan the only actor not from the original production, Hoffman draws a card from his friend Paul Thomas Anderson to convey Jack’s broody, slow-to-fire inner state. Connie inspires him to learn to swim, to cook her an intricate meal. Winter passes to spring, a long winter comprised of emotional years, toward the romantic notion of a boat ride in Central Park. While Jack fixes on the “positivity” of reggae, the soundtrack shimmers with other music, as in “Punch-Drunk Love.” The score is co-composed by Grizzly Bear and Evan Lurie, and there are songs from Fleet Foxes, DeVotchKa and Cat Power. Jack tries to visualize the steps to happiness, but the soundtrack envelops him in his own low-intensity mood to bring color to his blue, blue world. 89m. (Ray Pride)