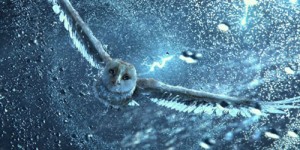 Gorgeous imagery and restrained use of 3-D mark Zack Snyder’s hoot of a foray into children’s animation. “Legend of the Guardians: The Owls Of Ga’Hoole” is adapted from the first three of fifteen young adult novels by Kathryn Lasky, with a story that seems likely to frighten the short pants off any kids who see it: a rank of good owls versus bad owls, the good owls battling genocide and the bad ones wreaking all manner of militaristic mayhem. There’s a full nest of voice talent, drawing largely from a who’s-who of Australian actors—the film received Australian film production credits—including Geoffrey Rush, David Wenham, Hugo Weaving, Jim Sturgess, Helen Mirren, Anthony LaPaglia, Joel Edgerton, Richard Roxburgh, Deborra-Lee Furness and Abbie Cornish. Snyder’s knack for painstaking production design, seen in earlier movies like “300” and “Watchmen,” enlivens a story that eventually becomes near-impossible to follow, with feathery fiends with myth-heavy names being hard to tell apart. Talking to Snyder last week, he told me the style of filmmaking wasn’t so different, requiring about the same amount of preparation as his live action-CGI hybrid filmmaking. But, exposition of the book series’ invented backstory thunders instead of flutters. The Lisa Gerrard song that accompanies a key montage sounds weirdly like The Postal Service, but the score does all it should do in the intense action sequences. And the owls’ flight through storms at sea soar. A new Road Runner cartoon precedes; it’s awful in every possible way, dull, unimaginative, unfunny and with an unappealingly stylized Wile E. (Ray Pride)