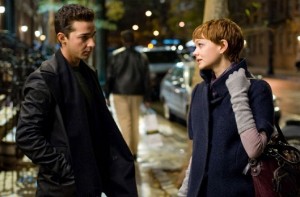 In the song “Strange Overtones,” from David Byrne and Brian Eno’s 2008 album, “Everything That Happens Will Happen Today” Byrne croons, “This groove is out of fashion/ These beats are twenty years old/ I saw you lend a hand to/ The ones out standing in the cold.” Several tracks from that album, augmented by a score by Craig Armstrong (“World Trade Center”), provide an added pulse to “Wall Street: Money Never Sleeps,” Oliver Stone’s lucid, if jangled sequel to his twenty-three-year-old hit. Refreshingly, the “beats” aren’t out of date, and pulpy bombast surfs across the wreckage of our financial system. While the script courses across the breadth of the collapse of banks and the cooptation of bailouts, the script, credited to Allan Loeb and Stephen Schiff, is deft at introducing and sketching quick illustrations of some of the more arcane elements of banking that led to the collapse of Lehman Bros. (rendered here as Keller Zabel) and later, the fall of reinsurer AIG (aka Churchill Schwartz). Stone offers small footnotes, including cable media figures and economic Cassandras (such as “Dr. Doom,” Nouriel Roubini). That dialogue at least pulls us away from the romantic intrigues of Gordon Gekko’s website-baring young daughter, Winnie (Carey Mulligan) and trader Jake Moore (Shia LaBeouf, only a few months older than “Wall Street”). The busy-ness continues with many cameos, including Stone himself as an investor, Frank Langella as a “King Lear”-like banking mentor and Josh Brolin as a dishonest billionaire banker. (Langella plays Lou Zabel; Stone’s banker father was named Lou Stone.) Some of the aphorisms are punch-drunk or overcooked, but it is bracing to hear a character like Douglas’ tell an audience, in a major studio production, “You are all pretty much fucked. You are the NINJA generation… No income, no jobs, no assets.” And while Charles Ferguson’s upcoming documentary, the angry “Inside Job,” is more sober, Stone manages to sound some of the same pessimistic chords about what comes next in the world. There’s a terrible, terrible third-act development, set in Zurich, that almost crashes the movie, but the scene at least provides a reason for its fantastical, optimistic final scenes, especially one that gathers its central characters on a leafy late-night Manhattan street. (Money never sleeps, and sometimes it only whispers.) Just enough money. Just enough foolish hope. Gekko remains an opportunistic lunatic, and his spirit remains at large. There are several smaller cameos, in-jokes of various magnitudes, but the most alarming may be the moment in a restaurant when Gekko finds himself face-to-face with Vanity Fair editor Graydon Carter. With Susan Sarandon, Eli Wallach and Austin Pendleton. 133m. Widescreen. (Ray Pride)