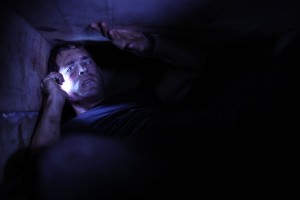 Chris Sparling’s screenplay for “Buried” begins ominously with the slugline: “INT. UNKNOWN ROOM.” That “unknown room”? Paul Conroy (Ryan Reynolds) is in a box. A casket crafted from rough-hewn planks. In the desert. In the ground. Under the sand. He’s an American contractor in Iraq, held for a two-million-dollar ransom by unknown captors who’ve left him with a few small items: Zippo lighter, BlackBerry, flashlight, light tubes, a script to read on a hostage video. (Eduard Grau, who also shot Tom Ford’s “A Single Man,” has referred to Reynolds as a collaborating lighting cameraman in the wielding of these light sources while acting.)

The set-up is as confined as you can get. With a menu only in Arabic, he fumbles trying to figure out who to call. Who do you call? And what corner of a crypt is best for cellular reception? Four years have passed since that day. Waiting for word from a negotiator, Conroy calls his mother, who suffers memory loss. Pow! Cultural amnesia: how much of the political discussion in contemporary life, even leading up to an election, deals with the realities of those in the boots on the ground in the deserts of Iraq and Afghanistan, soldiers or workers? This is the strength of Rodrigo Cortés’ direction: it’s sly thematically, and it’s richly inventive visually, varying his vocabulary of images and tempo, so that after the initial claustrophobia passes, different states of mind, different states of fear, are evoked. The look evolves over the course of ninety-four minutes.

The battleground is infinitesimal. “Yeah, but it resounds,” Cortés tells me in his fast, Spanish-accented English, with Reynolds looking on. “That’s what I love of small-premise stories, they have a very powerful allegorical level. That’s much more important than the ideological or political level, because this kind of truth, these kinds of truths, change every six weeks. But the metaphorical level is much more powerful. It’s like when you see Romero’s zombie movies of the seventies, yeah, there are zombies attacking a mall, but there is more of a comment about society somehow. It’s like when you see ‘Duel’ and it’s just a truck and a car, but it resounds inside of you, it’s talking about a lot of things. At the end, you are witness to the fight of a primal man killing a mammoth for the very first time. It happens with ‘I Am Legend,’ the Richard Matheson story. The meaning changes with the time.”

I’d just come from a screening of “Never Let Me Go,” another movie opening Friday, which also is multivalent in its metaphors—it can jog you to think about processed food, about medical ethics, it’s there if you care to reflect, if you want to unearth it—which is the case with other strands of Sparling’s script. “Right, it’s not on-the-nose, it resounds, it’s inside of you,” Cortés says.

“Buried” doesn’t hide the fact that it’s one location, one man, one day. Cortés has said, to shoot in a coffin, it’s nonsense, it’s foolish. “Well, it’s impossible. Basically,” he says, laughing. “So that’s a good reason for doing that! One thing you figure out very soon is that there are no references. I mean, of course Hitchcock was the great reference, because he did those amazing technical challenges in his golden years. But even when you study ‘Lifeboat,’ then you discover that there are nine actors! You can be with these two, and when you are bored, you can be with these other two, the sky changes, now it’s afternoon, it’s night, you have stars, you have clouds, you have calm sea but then you have a storm. You have a lot of elements. You tend to think, that’s the easy way, Hitchcock. But of course that’s not the easy way. It’s like when you see ‘Phone Booth,’ they tell you, okay, it’s shot inside a phone booth. That’s not true! The guy’s inside the phone booth but the camera is wherever, the booth, it’s transparent. And there are a lot of characters. There are hookers, policemen, the crowd, the TV news guys, the shooter. So you have no references. You have only one actor and you have limits three inches from his nose. It’s not transparent. You feel pretty alone at the beginning when you try to plan everything.”

There’s the potential Conroy could drown in sand. Reynolds told me the shoot, spread across seven specially designed coffins, did heighten his claustrophobia. But sand? “These things don’t… In Canada, we just don’t have these kinds of problems. Quicksand! This sounds like an episode of Super Mario Brothers or something. For us, it was like, maybe… a bear attack? Maybe being dragged away in the night, y’know, by your eyelids, by some enormous bear. Beyond that, no, nothing really else. Sorry.”

The sound design is impeccable, as specific and terrible as other dangers ripping at Conroy. The voices on the phone, threatening, helpful, hateful, all are pitched at ideal timbre. “All of it was done afterwards,” Reynolds says, “The effect was, one actress playing all the roles when we were shooting, just for the sake of simplicity. She was sequestered outside of the soundstage in another soundstage that was soundproofed, so we could overlap and keep it messy so we could cut it together properly, we could use all of my dialogue. And I actually wound up not looping a single line in the movie, which I’ve never done before. Especially when it’s a movie where I’m the only one talking. I’d think there’d be something atmospheric that would ruin a take or something, but no, it was pretty much a lockdown.”