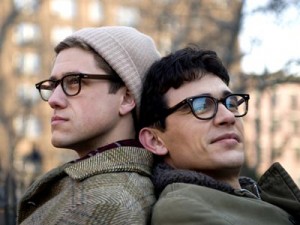 “Howl” is a rush, a celebration of the joy of cleverness and language and discovery in the form of a kind of compound fiction-nonfiction film made by two veteran documentarians.

Some reaction from the Sundance 2010 opening-night debut of Rob Epstein and Jeffrey Friedman’s film, built around the 1957 obscenity trial against the publishers of Allen Ginsberg’s poem, was critical, but I’d like to think as many reviewers were bruised by the still-challenging language as were troubled by its hybrid form. Among its pieces is James Franco playing the young Ginsberg in an apocryphal magazine interview drawn from actual conversations with reporters, moving around his apartment, lying at length on his couch as if under analysis. The trial is cast with lovingly precise actors, relishing how to play the attitudes of that decade. A performance by Franco of parts of the poem recurs, modeled after its celebrated first full reading, and Eric Drooker animates some of the soaring sentiments and staggering paranoia of the poem. Drooker’s work is bold (and ribald), including a display of skyrocketing, exploding spermatozoa, typewriter hammers with gibberish instead of the alphabet on their tips. Other images bring to life iconic photos taken by Ginsberg and friends like Kerouac, Cassady and Orlovsky. The biggest draw may be Franco, gleaming, like you’d imagine the young Ginsberg, with lucid, loping, comic delivery.

The package is a little like a Cornell box, with smaller bits adding up to an intricate whole: words here, bright colors there, a length of magnetic tape, a postcard portrait of Poe on an ice box. Notably, even on a scrupulously restrained budget, Thérèse DePrez’s production design is lovingly detailed; a particular kind of refrigerator in the kitchen, as glimpsed in an archive photo, crowned by wine bottles and a dinky steam iron.

“Hybrid” is the adjective that’s been applied most often; Epstein says he’s heard “enacted documentary.” In conversation with the two filmmakers, Friedman adds, “Dramatic documentary was a term I saw. The one we’ve come up with recently is ‘poem-pic,’ that’s what we’re calling it.” In the courtroom scene, condensed from trial transcripts, a highlight may be the prosecutor played by David Strathairn’s delivery of “What… are angel-headed hipsters?” The precision of each actor’s performance during the obscenity trial against City Lights Books for publishing the palm-sized volume speaks, well, volumes. Jeff Daniels excels as a supercilious literary witness, with his judgment of Ginsberg’s friends as “drifters of Dadaist persuasion” rolling like honey off his tongue. Alessandro Nivola, as San Francisco Examiner book critic Luther Nichols embraces the language and the poem, his full-hearted defense breathing with the breadth of ideas. As defense attorney Jake Ehrlich, a San Francisco stalwart who was the basis for Perry Mason, Jon Hamm is as all-American as Superman, a confident dandy who believes ideas will prevail. As Judge Clayton Horn, you can watch Bob Balaban’s expressions and reactions to gauge his evolving view of the case. The sheer looniness of the trial is a comedy of manners but also chillingly timely.

And we return to the poem, which isn’t ever performed straight through, and passages recur as refrains. Toward the end, the audience at its first gallery reading is shown, not dumbstruck, but awestruck. “Each of the elements,” Epstein says, “we tried to have some kind of throughline and in the reading, for James, we had his performance, we wanted his performance to evolve from kind of nervous and stiff, to joyous and—”

“—Transcendent at the end. The audience, too,” Epstein continues. “What we were trying to do there was to telescope the way Allen read the poem over the years. It’s not a faithful reconstruction of the Six Gallery reading. It’s using that as an inspiration. But the early recordings of Allen reading the poem are almost flat and monotone. We certainly didn’t want that. There were also readings that were very boisterous and outrageous and dramatic. So we tried to build a dynamic into his performance. The same with the audience. You know, there were many stories about audiences cheering back, especially at the Six Gallery, Jack Kerouac in the audience, yelling ‘Go, go, go!’ But we didn’t want to have that from the very beginning. Each of the elements has their own dramatic and emotional arc.”

“At least in our minds, they do!” Friedman says, laughing.

In half an hour, we’d talked around the ideas of freedom, joy, youth, and I ask if the two could reduce their sense of their film to a single word. “One single word?” Friedman responds quickly. “I’d say ‘authenticity.’ Just because I think that’s so much of what Allen was expressing, what he thought was important for himself as an artist.”

“And fearlessness,” Epstein says. “He talks about the ‘fear trap,’ the illusory fear trap, the way that we’re controlled by fear, y’know, when you turn on the news, it’s all about things to be afraid of. Which is—”

“Which is also what Jon Hamm’s, Ehrlich’s, closing speech is about,” Friedman says. “Stop running from nonexistent destroyers of morals.”