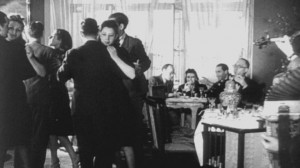 Yael Hersonski’s “A Film Unfinished” starts from an hour of footage shot by Nazi propagandists in the Warsaw Ghetto in May 1942, finding in its outtakes a truth more disturbing than the lies that Goebbels had meant to spin from its images. That footage had been the source for “Das Ghetto,” a short film, abandoned but found in Nazi archives after the war. But a reel of footage that was subsequently unearthed revealed how “reality” had been faked, staged and shot with multiple takes. The obsession with World War II documentaries once earned the History Channel the dubious nickname of “The Hitler Channel”; there are far too many provocative implications about cultural memory to dwell on the implications of what techniques of Goebbels’ cameramen are channeled in today’s media. What was once manufactured to condemn others now condemns its makers. Hersonski’s mix of elements doesn’t completely hold together, but there are inspired devices throughout, including that of having survivors sit in a theater and offer commentary on the raw footage as we see it. Displaying the horror, the obscenity, of this corrupt image-making, is rigorous and necessary bearing of witness. (Unrated, after an unfair MPAA rating was returned.) 89m. (Ray Pride)

“A Film Unfinished” opens Friday at the Music Box.