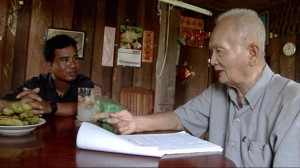 Thet Sambath was a reporter for the Phnom Penh Post during the genocidal rule of the Khmer Rouge in Cambodia in the late 1970s, the only survivor from his family during Pol Pot’s reign. Nearly two million more died in the “killing fields.” Sambath worked for over a decade to gain the trust of ex-assassins, usually illiterate peasants, to hear their stories of murder and massacre, as well as the octogenarian Nuon Chea, who had been Pol Pot’s second in command. Sambath’s calm in the face of these “Enemies of the People” (which he and Rob Lemkin co-direct) is a marvel of restraint. Their victims were the original “enemies of the people” in Khmer Rouge-speak; the title ironically tips back onto them. There are many models of on-camera interviewing style, but Sambath’s quiet confrontation of Nuon Chea may be the most harrowing of his close-up interrogations. Disturbing, rueful, cathartic, “Enemies of the People” is filled with remembrances like “I slit so many throats that my hand ached so I switched to stabbing in the neck.” And that’s one of the understated ones. An overemphatic score distracts, but only slightly. 93m. (Ray Pride)

“Enemies of the People” plays Friday-Monday and Wednesday at Siskel.