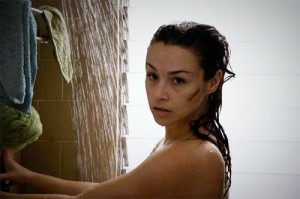 Marybeth (Danielle Harris) wants to fetch the corpses of next of kin decomposing in a Louisiana swamp. And get revenge against Victor Crowley (Kane Hodder) who put them there and almost got her too. This legendary ghost wants revenge too. Born a biracial deformed bastard cursed by a woman with terminal stomach cancer, this hulking outcast in overalls wants to dismember the teens who once taunted him one Halloween night and triggered a fire. Trying to break into the burning shack where teenaged Victor was trapped, his father swung a hatchet at the door and accidentally hit him in the face on the other side. “I’m going to bury that hatchet deep into his fucking face,” vows Marybeth, who jams a thumb into one of Victor’s eye sockets in the opening scene. This follow-up to the first “Hatchet” (2007) is less funny. Returning writer-director Adam Green measurably prolongs his carnage if you’re counting the number of slashes and thrusts it takes Victor to decapitate and do other blunt, ragged hackings-in-half of his victims. A face-bashing sequence with the dull end of an axehead contains about ten more blows than Gaspar Noé furnished in his similar scene with a fire extinguisher in “Irreversible.” Victor may not get cable TV in his backwater, but strangling your victim with his own intestines or pushing another’s face into the spinning prop of his own outboard motor are not new. And didn’t you use an electric beltsander on another head back in the R-rated “Hatchet”? Released by Dark Sky Films in Orland Park, “Hatchet II” is jokey genre gore with the ballyhoo of “the widest release of an uncut and uncensored genre film in more than 25 years.” With Tony Todd, Parry Shen, Tom Holland, R.A. Mihailoff, AJ Bowen, Alexis Peters. 96m. (Bill Stamets)