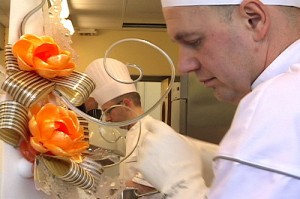 Fussbudget studies getting play in the news lately seem to be about the effect of the internet on the way we think. There must be a few in progress about how “reality” television affects reality, as well (and not just on the more extreme manifestations of political figures’ wishful thinking). More readily observed is how documentary filmmakers have been affected by “reality,” as in veteran directors Chris Hegedus and DA Pennebaker’s “Kings of Pastry.” Slightly better-than-average television in a feature format, this efficient bit of softcore foodie porn takes a look at the quadrennial competition between sixteen pastry chefs for the title of Meilleur Ouvrier de France (“France’s Best Craftsman). Gently observed, it’s a long way from the fierce gaze of “Don’t Look Back,” the documentary about Bob Dylan’s 1965 tour of England that the Evanston-born Pennebaker, now 85, directed, or 1993’s fly-on-the-wall “War Room,” co-directed by Hegedus. Their primary figure is Jacquy Pfeiffer, who co-founded Chicago’s French Pastry School, and he makes a good entry figure for capturing the compressed pace of the competition: a few florets of empathy atop the artisanal-cum-industrial rhythms, process with a human face. With Sebastien Canonne, Rachel Beaudry, Philippe Rigollot, Stephane Glacier. 84 min. (Ray Pride)