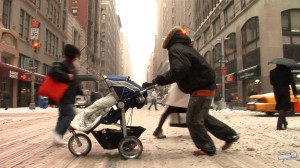 In “The Prince of Broadway,” as with his earlier “Take Out” (2002), which followed a Chinese émigré food deliveryman, director Sean Baker shows himself to be an important practitioner of contemporary street-level Manhattan neorealism. This small-enough-to-hold-in-your-hand gem follows street-hustling Lucky (Prince Adu), who tempts passersby in New York City’s wholesale clothing district into backroom deals on discount goods. Baker’s documentary intimacy in his rough-and-tumble telling is quickly followed by another sort of intimacy: an ex- of Lucky’s leaves him with an infant boy. Baker’s loose yet almost unerringly precise style, shot on HD, starts from cinéma-vérité but arrives at something much more suggestive about the vitality of urban life that may seem only seedy on the surface. Plus, there’s the magnetic personality of Aiden Noesi, the eyes-wide child in the center of the story. “Prince of Broadway” is exceptional low-budget filmmaking, a triumph of sensibility over means. As Oprah and Tyler Perry did for him with “Precious,” Lee Daniels offers a presentation credit to Baker’s film. With Karren Karagulian, Keyali Mayaga, Kat Sanchez, Victoria Tate, Chris Bergoch, Brea Cola, Roger Harkavy, Adesuwa Addy Iyare. 102m. (Ray Pride)