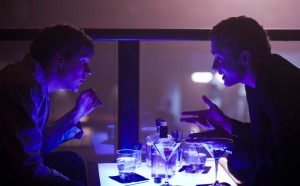 Likely the most sheerly entertaining, breathless feat of American filmmaking in months, “The Social Network” tumbles headlong from its opening scene at a restaurant between ambitious Harvard student Mark Zuckerberg (Jesse Eisenberg) and his Boston University girlfriend Erica (Rooney Mara). Aaron Sorkin’s dialogue zings and pings at great velocity—”Going out with you is like dating a Stairmaster”—while David Fincher photographs them with variable focus on facial planes, cheekbones, eyes, snapping out and then into sharp relief in the dim room. Through image and sound, Fincher immediately announces this is more than a story about the founding and near-foundering of Facebook. Around them, even in half-focus, each movement is calibrated, as they will be for the next two hours, a story of outsiders and insiders, unthinkable wealth and unbearable grudges, told with seeming effortless and heightened naturalism yet exquisitely choreographed by a master craftsman or two. Fincher is an adept of digital filmmaking, using postproduction techniques to augment the often low-light images captured with the RED camera, to the point of having one actor play a set of twins who are most often in the frame together. Eisenberg, a superb young actor, may have been born to play this character, delivering dialogue like a Terrence Malick savant-child: he’s high-functioning everything, for worse or for better. But in the tumult, never feeling rushed nor overstuffed, Fincher finds ways to suggest time suspended: the reflective gray-to-brown of aggrieved night skies, digitally applied sculpts of breath in winter night air, snowflakes just so, that would melt to touch like a dream. But especially, a nightclub scene that includes a long take that is the aural equivalent of the extended Copacabana Steadicam scene in “Goodfellas,” which mixes the loping, bass-heavy, ominous music by Trent Reznor and Atticus Finch at full volume but does not diminish the dialogue between Zuckerberg and Sean Parker (the founder of Napster, played with eager glee by Justin Timberlake), a seduction toward different business ethics that is both infernal and liberating. Sorkin’s script for “The Social Network,” structured around signposts and depositions, is 162 pages long. Fincher’s movie, playing the structure fluently, is 120 minutes. Apparently nothing’s gone by the wayside: it’s speedy, talkative, thrilling in its every moment: “Listen. You’re going to be successful and rich. But you’re going to go through life thinking that girls don’t like you because you’re a tech geek. And I want you to know, from the bottom of my heart, that that won’t be true. It’ll be because you’re an asshole.” The film is bookended with a scene where another woman talks to Zuckerberg and the weight of being an “asshole” comes up again. The ending chills as the music swells: it’s the virtual equivalent of Nick Carraway looking toward the end of the pier at the end of “The Great Gatsby,” borne back ceaselessly into the network. Refresh. Refresh. Refresh. Refresh. With a bravura Andrew Garfield, brimming with empathy as one of the betrayed suing Zuckerberg; Rashida Jones, Max Minghella. 120m. Widescreen. (Ray Pride)