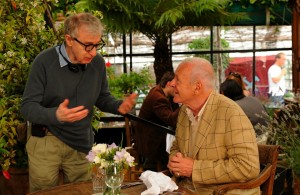 Woody Allen has said a lot of late that he believes his latest film is always his worst, and at last, you can take him at his word. His fortieth feature as a director, “You Will Meet A Tall Dark Stranger,” is advertised as a comedy, but it’s not. It doesn’t seem to be straining for anything more than idle spite. In this London-set but not London-sprung bumf, saddled with an unmotivated narrator of bromides (Zak Orth), 73-year-old Anthony Hopkins, slightly younger than Allen, plays “Alfie,” a man of inexplicable wealth who has a senior moment, leaving his brutally belittling wife of many years (Gemma Jones) for a tall blonde prostitute (Lucy Punch). Their daughter, Sally (Naomi Watts), a smaller blonde, works at a high-end gallery, fantasizing about her boss (Antonio Banderas) while her husband, Roy (Josh Brolin), longs for the woman playing flamenco guitar across the courtyard (Freida Pinto, “Slumdog Millionaire”). As the whining harridan, Jones overworks watery rheumy pale blue eyes, but her unceasing interference and belittlement is pathetic and unilluminating unless you consider her modeled after Allen’s own mother, with the attributes he disdainfully credits her with in Barbara Kopple’s “Wild Man Blues.” Allen’s disregard for his audience extends to no one in “YWMATDS” taking an afternoon off to murder her. Nothing but accents mark this imaginary place as London; the economic, social and cultural observations belong in Allen’s 1980s Manhattan, not any recognizable today. Vilmos Zsigmond’s cinematography tends to an orange akin to a heat-damaged 1960s Eastmancolor print. And as for Woody’s nifty, snazzy pile of 78-rpm shellacs, their trite jauntiness, after all these years, leaves me fantasizing about dial tones. Wwwwwwwwwwwwwwwvvvvoooooooooo… 98m. (Ray Pride)