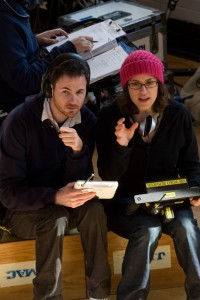 The third feature from the young writing-directing team of Anna Boden and Ryan Fleck, “It’s Kind Of A Funny Story,” adapts Ned Vizzini’s young-adult novel with the same compassion as their dramas “Half Nelson” and “Sugar.”

“Funny Story,” shot by ace cinematographer Andrij Parekh and edited by Boden, charts a week in the life of 16-year-old Craig (Keir Gilchrist, “United States of Tara”), a bright kid who walks from the Brooklyn Bridge one night to a mental-health clinic, looking for help for what’s cycling in his head. Once he’s committed himself, his parents (Lauren Graham, Jim Gaffigan) urge him to stay in, and he meets a range of characters who rise above simple life lesson, from the older Bobby (Zach Galifianakis, a vulnerable bear) to Noelle (Emma Roberts), a girl his own age also struggling to figure it all out. There’s a delicate dance with sensitive material.

Gentle and funny with intermittent vulgarity and caricature, it’s an interesting choice for the pair; they’ve been slotted as the queen and king of lovingly observed naturalism and here we are with Ferris Bueller redux, I say, wondering if they think this such a different movie. “On the surface, it’s super-different,” Fleck says. “But I think that more observant people can see the similarities. This is the first movie where we have sequences that appear [as] fantasy or the subjectivity of a dream, animation, a fantasy musical number. We’ve never done anything like that before, everything’s been the objective reality. But we attempted to balance that with the hospital and the characters and to keep them grounded. The acting, I believe, is fairly nuanced between Zach and Keir. That stuff we’re proud of.” Boden adds, “We still feel loving towards them.” “Loving, yes, that’s true,” Fleck says.

I didn’t think of “Bueller” until afterwards, but “Annie Hall” did seem like a potential influence, with a willingness to jump in and out of all kinds of subjectivity. “I just saw ‘Annie Hall’ again a few months ago, and I think there was an unconscious influence. There’s animation, it flashes back, it flashes forward—” Boden says, “That’s not what I remember when I remember back on the movie, but now that you point it out, of course. I remember the more intimate scenes between [Annie and Alvy] like in the kitchen—” Fleck says, “The constantly turning to the camera, focusing on his thoughts.”

My general impression of the reviews after “Funny Story”‘s Toronto premiere was that there were reviewers that either didn’t like or get this film. Do these filmmakers look at that stuff or react to it? “I haven’t seen any of it,” Boden deadpans. “I thought everybody liked the movie.”

“After our first two movies, how could anyone not like one of our movies?” Fleck says, joking. “I read one. And then I don’t think I’m going to read any more. I read one bad one and it was just clear… Any review that starts out with, and from the team that made ‘Half Nelson’ and ‘Sugar’…” You sort of need to put those two aside for a bit and look at the movie on its own terms, what it’s trying to do, who it’s for and… Yeah. The one I read was fairly mean.”

The cinematography is full of subtle and clever strokes and strong compositional choices—many shots of Craig are keyed to receding perspectives, as if a lifetime of potential could open up for him at any time—but the editing also is filled with gentle flutters as well as comic timing. “I love it!” Boden says of editing. “It’s by far my favorite part of the process. Yeah. It’s anxiety provoking when you known that any movie you make could mess something up forever. ”

It’s a finite series of choices rather than when you can do anything right and everything wrong when you’re on the set. “Yeah. When you’re in an edit room, it’s like the only thing you can do is make it better. And if you make it worse, you can go back to how it was before with just the hit of a button.”

The ending, drawn from the final pages of the book, draws on a stylistic device akin to one in “Run Lola Run,” where the trajectory of entire lives are captured in a few words and carefully chosen and edited still images. The effect is cruel and mortal in Tykwer’s film: here, it’s optimistic, open-ended, bright-eyed, bushy-tailed. The troubles of one privileged white kid, as the narration says, may not add up to much, but from them, a good life, great moments, may grow. It’s kind of a happy story.