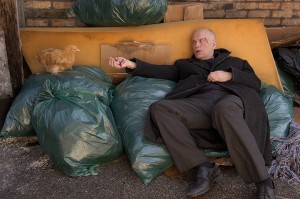 In its forty-sixth edition, a first look at the programming of the Chicago International Film Festival passes on retrospectives and sidebars, and most titles of interest are premieres of movies that should open in Chicago in coming months. (There are fourteen titles in the New Directors Competition, of which I’m one of the four judges; I hope there are discoveries there.) First week attractions of note that will be released soon are Clint Eastwood’s “Hereafter,” a multipart story by screenwriter Peter Morgan (“The Queen,” “Frost/Nixon”); “Stone,” a character study about infidelity and religious belief from John Curran (“We Don’t Live Here Anymore”); and Abbas Kiarostami’s “Certified Copy,” which won Juliette Binoche the Best Actress nod at Cannes 2010. Cannes’ Palme d’Or winner “Uncle Boonme Who Can Remember His Past Lives” by SAIC grad Apichatpong Weerasethakul is also on this week. Cannes offered a slot to the mini-indie teen drama “Myth of the American Sleepover” as well. Bertrand Tavernier turns to costume drama with “Princess of Montpensier” and Quebecois kid-actor-turned-boy-director Xavier Dolan-Tadros turns up with his second feature at the age of 21, “Les Amours Imaginaires,” a sweet title now known as “Heartbeats” in the U.S. Two films likely not to light up a screen again: “Revolución,” with short contributions from ten Mexican directors, including Carlos Reygadas, Gael García Bernal, Diego Luna, Gerardo Naranjo and Fernando Eimbcke. Rodrigo García’s contribution, a single take in which figures from the Mexican Revolution barrel full dress down a modern L.A. street, comes highly regarded. And, a real rarity, 2007’s unreleased “Drunkboat,”  a Chicago-set drama from gifted theater director Bob Meyer (a Chicago expat living in Paris), starring John Malkovich and John Goodman in a story of a boy growing up among alcoholic men. (Ray Pride)

All programs are at the River East.