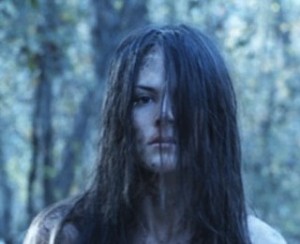 Despite its title, this remake of a 1978 horror film much-maligned by Gene Siskel among other reviewers, is not a first-person spitter or a first-person slasher affair, although the film’s site splatters blood when your cursor pokes at any of its links. Nor is there any grave. Steven R. Monroe directs a script credited to Stuart Morse, whose bio is omitted in press notes, which manage to make room for bios of the cinematographer, make-up effects artist and visual effects supervisor. This befits a plot that nullifies a female novelist. Jennifer Hills (Sarah Butler) rents a cabin on Mockingbird Trail to write her second book. Five local fellers rape her. It’s a class thing and a country thing, you big city c— who thinks yer better ‘n us. She is, of course, the film concurs. After falling off a bridge, never to be found in the bayou, Ms. Hills is back a month or so later. Proving far more imaginative than her tormentors, this writer exacts what’s called poetic justice. One by one, them five fellers get real painful payback. It’s custom-fit to the ways each one befouled her earlier. This is well-crafted eye-for-eye gore for the reptilean brain. There’s not an iota of implication, though, that the rapist who wielded a camcorder throughout the attacks is there for audience identification or mortification. Our heroine jabs fishhooks through his eyelids to keep his peepers peeled, kind of like in the ultraviolence deconditioning scene in “A Clockwork Orange” with its involuntary exposure to porn films. Crows come-a-peckin’ at the easy ocular pickings in “I Spit on Your Grave.” Watch at your peril. With Jeff Branson, Daniel Franzese, Rodney Eastman, Chad Lindberg, Tracey Walter, Andrew Howard. 106m. (Bill Stamets)

“I Spit On Your Grave” is unrated and opens Friday at 600 N. Michigan.