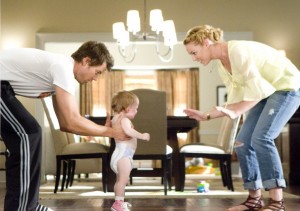 To its credit, the strain on credulity in this romantic comedy is modest. Screenwriters Ian Deitchman and Kristin Rusk Robinson only ask the State of Georgia to allow the parents of a one-year-old to assign guardianship with physical custody to two unrelated, unmarried individuals, in the event of the deaths of the parents. The late couple once set up caterer and baker Holly (Katherine Heigl, “Knocked Up,””Grey’s Anatomy”) and basketball broadcast technician Eric (Josh Duhamel, “Transformers,” “Turistas”) for a blind date that backfired in a matter of minutes. Three years and one fatal accident later, these two learn they are godparents and homeowners in suburban Atlanta. Greg Berlanti directs kindly and molds characters with plausibility and appeal. Even the reaction shots by baby Sophie are done with tasteful cuteness. “Life As We Know It” is far more mature than romantic comedies as we know them. With Josh Lucas, Christina Hendricks, Hayes MacArthur. 114m. (Bill Stamets)