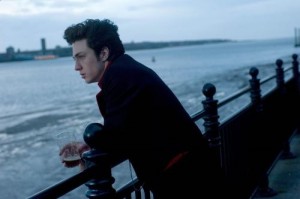 In “Nowhere Boy,” Sam Taylor-Wood directs a sensitive script by Matt Greenhalgh (“Control”) about a 15-year-old lad in 1955 finding his mother and figuring out where he’s headed, besides out of Liverpool. One day John (Aaron Johnson, the teen hero in “Kick-Ass”) flashes his penis at school girls for a giggle. Another day, his frisky long-lost birth mother (Anne-Marie Duff) takes him to the movies. During a black-and-white newsreel of Elvis, girls scream like crazy. “You know what rock ‘n’ roll is?” she asks. “Sex,” she says. John sees the light and moves from harmonica and banjo to guitar and starts a band. That part of “Nowhere Boy” will lead one day to the song “Nowhere Man” since John’s last name is Lennon. But the main focus is John working out his feelings about his stern Aunt Mimi (Kristin Scott Thomas) who raised him, for the most part, and her sister Julia whose taste for men and trips to the nervous house kept John out of her life for years. McCartney (Thomas Brodie Sangster) turns up, but Mimi is the one to watch here. With David Morrissey, David Threlfall, Josh Bolt, Sam Bell, Ophelia Lovibond. 98m. (Bill Stamets)