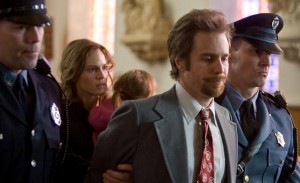 Reprising her turns as scrappy fighters in “Million Dollar Baby” and “The Next Karate Kid,” Hilary Swank now plays Betty Anne, a working-class mother of two boys who gets a law degree only so she can get her older brother out of prison. This eighteen-year saga is based on an actual case in Massachusetts that delimits the dramatic options for screenwriter Pamela Gray, who earlier penned the affirmative fact-based biopic “Music of the Heart” (1999). Improbably, the original bloody evidence surfaces, despite its scheduled disposal years before DNA testing. The Innocence Project takes on the case. In light of such documentaries as “The Trials of Darryl Hunt” and “After Innocence,” though, a less predictable outcome might make for a better film, if not a better life for the real Kenny Waters, played here by Sam Rockwell (“Iron Man 2,” “Moon”). Tony Goldwyn directs an engaging procedural of exoneration, but the bond between Kenny and his sister Betty Anne amazes as much as the legal system that mangled them. With Minnie Driver, Melissa Leo, Peter Gallagher, Juliette Lewis. 107m. (Bill Stamets)