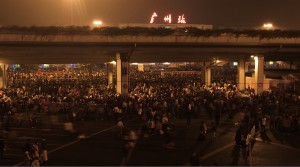 The seasonal exodus of millions of Chinese families from the cities where they work to their villages to see their children and extended families for Chinese New Year is captured in Canadian-Chinese Lixin Fan’s “Last Train Home,” an uncommonly intimate, observant documentary gem shot across three years. Like his countryman Yung Chang, who directed the fine “Up the Yangtze” (and Mila Aung-Thwin, who produced both films), Fan has a discerning eye for suggesting the large picture through the smaller one, following one family, the Zhangs, as they join the 130-million-strong reverse exodus. (Fan was an associate producer on Chang’s film.) “Taste the bitterness first, the sweetness will follow,” an elderly woman says of a regional fruit, but it applies to the implications of the Zhangs’ narrative, their journey. (And tens of millions of others they stand in for.) Like Chinese filmmaker Zia Zhang-ke, Fan observes with intelligence, emotional reserve, with an affinity for landscape and place, and says, “Look. Here’s the present. Here’s where we are.” Wistful, lovely, near-tragic and necessary. 97m. 35mm. (Ray Pride)

“The Last Train Home” opens Friday at the Music Box. The trailer below offers a glimpse of the film’s daunting scale.