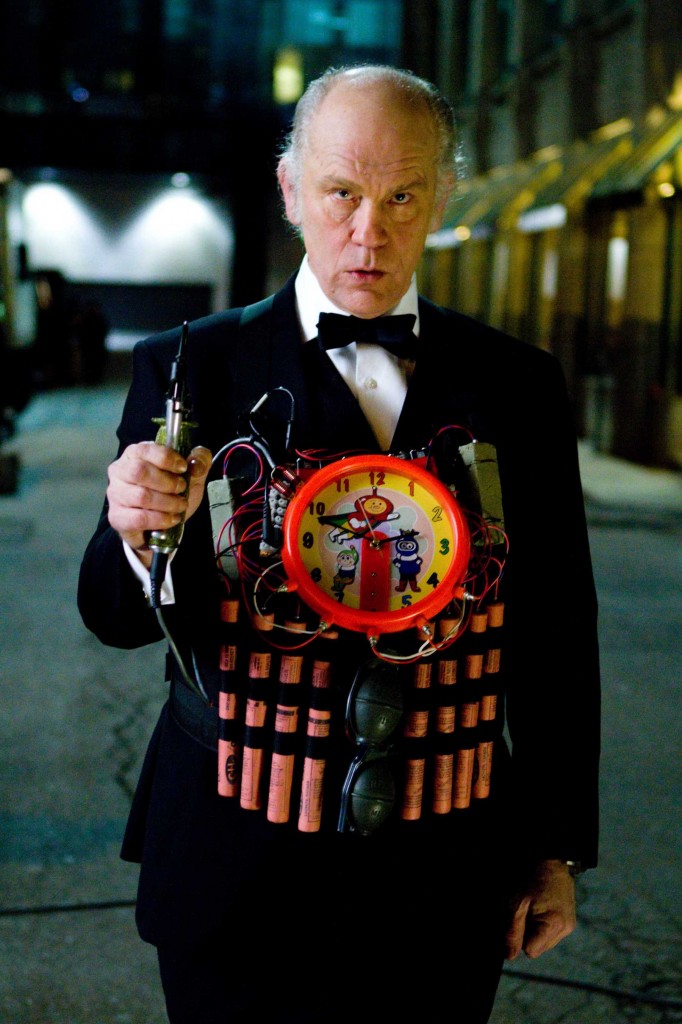 Ever-perverse and inventive writer Warren Ellis’ satirical graphic novel is transferred to the screen as a romp of wry hams: give Bruce Willis, John Malkovich, Morgan Freeman and Dame Helen Mirren a big gun and watch them go. It’s Ellis’ “Expendables.” This genial comic thriller posits the quartet as “RED”—”Retired and Extremely Dangerous”—C.I.A. pensioners who reunite to find out who’s assassinating their kind and why. “This useta be a gentleman’s game!” is the kind of line that sounds ehh, but works in performance. Aside from its actors, “RED”‘s saving grace is its willingness to find different notes of farce for each character, such as Malkovich being fully invested in one of his looniest incarnations (which is saying something). But smaller roles—including Mary-Louise Parker as the pension clerk that Willis knows only over the phone and Ernest Borgnine as a vault-keeper of secret intelligence files—ping with enjoyable comedy notes, sultry, grown-up comic-romantic banter. And, as directed by Robert Schwentke (“Flightplan”) and shot by Florian Ballhaus, the cartoonish palette doesn’t go too far in flattering the eye. The complications of Willis and Parker’s meet-cute, which involve repeated knock-out injections, is discomfiting enough that the characters address the subject repeatedly, but when the pair banter, there’s lovely splutter instead of splatter, her superlatively sexy voice and delivery deployed to gleeful result. The action scenes, shootouts and explosion of non-sclerotic proportion, are mostly fun; the location work is indifferent, with a Toronto-shot “Chicago” likely to prompt snickers in local showings. With Brian Cox as a randy Russian agent, Rebecca Pidgeon as a mumbly superior and Richard Dreyfuss, once again incarnating a Dick Cheney-style deus ex machina. 111m. (Ray Pride)