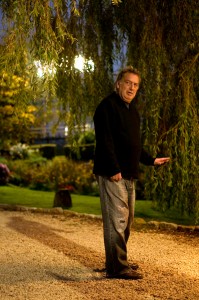 Eminent literary stylist William H. Gass may have best summarized why many writers write: “I hate. I hate hard. And I don’t forget.”

That homily isn’t exactly stitched on a sampler in “Tamara Drewe,” but it seethes in a subterranean way through an acidulous farce-cum-English pastoral of great satisfaction, about writerly desires, despair, dudgeon and derring-do, drawn distantly from Thomas Hardy’s “Far From The Madding Crowd,” more immediately from Posy Simmonds’ graphic novel, from a screenplay by Moira Buffini and directed by Stephen Frears with a sly smile and eyes wide in unblinking amusement. It’s twisted delight.

Characters don’t need to be nice, especially if they’re this funny. While Gemma Arterton plays the title character, a girl who left as a teen and returns with a lifestyle column in the Independent and a notable nose job, Tamara is a fulcrum for the egos and intrigues in the country village of Ewedown, and especially the neighboring farm, owned by successful crime novelist Nicholas Hardiment (a pompous and gloriously louche Roger Allam) and his wife Beth (steadfast Tamsin Greig), and run as a writers’ retreat and heritage-livestock farm. Their farmhand, Andy (Luke Evans), would, of course, have been the heir to the rundown building that Tamara has returned to sell. She gets caught up in the lives of the visiting writers, including American Thomas Hardy expert Glen (Bill Camp, superb as a somehow-silky pedant). A surly rock star (Dominic Cooper, a pout with eyeliner) drops into the mix, an archetypal drummer from his ADD to his Moe Tucker asides passing for jokes, exciting the movie’s geek chorus, village teenagers Casey (Charlotte Christie) and Jody (a luminously surly and foul-mouthed Jessica Barden), whose emails stir the same trouble letters did in Hardy’s “Far From The Madding Crowd.”

The blend is eccentric but combustible, and the performances a mix of knowing and brassy. Frears has a reputation as a diffident interview subject, but in fact he comes off as professorial, rumpled, reassuring. This is a man who says, “Yes… yes…” more often than Molly Bloom. He’s wearing faded plum linen trousers and a pale orange t-shirt when we meet. I admire the color clash, and a semi-amused smile emerges. “My wife’s a painter.” Shoulders shrug, eyebrows shrug. Say no more!

The adult language and teen deviltry would seem utterly foreign in an American movie: sex is casual and only one character meets with deathly punishment for their misprisions. “So the Americans are nervous about that sort of sexual fantasy?” Frears asks, slouched across a couch. “There’s films like ‘Bridget Jones,’ they’re just about sex, aren’t they?”

Even the casualness of the profanity is striking. In Canadian films, for instance, characters swear constantly and there’s no special meaning attached to words like “fuck.” the characters are simply swearing. An American movie, no matter how low-budget, you hit six “fuck”s and a “cocksucker,” you’ve reached some investor’s idea of a quota. Frears deadpans, “Very life-like, iddn’t it?”

Still, I say, you do seem like someone who appreciates a good swear. “Well, it’s only that people speak—that’s how people speak. Particularly heads of studios!” He laughs.

While distantly derived from Hardy, there’s an interesting layer in “Tamara,” a subtext of continuity. Tamara’s taken Andy’s birthright, his estate, has him dolly it up so she can sell it. There will be further generations in this village, even if they’re all like the glorious pair of resentful, scummy little girls. “Yes, that’s right.” A pause. “Umm.” A pause. “They have it really rough, those kids. They’re sort of unrepresented in a way. What do American kids do? Just take drugs?”

Unlike, say, Woody Allen’s “You Will Meet A Tall Dark Stranger,” with writer figures that sound like kindergarteners who have yet to make acquaintance with even a proper crayon, “Tamara Drewe” is rife with lines like “Oh, Christ! He’s been translated into Icelandic.” That’s how writers talk.

“Yes, mm,” Frears says, purring. “All… jealousy. Money and sex.” A Chicago writer has published his first novel, it’s 1,030 pages, I say. Frears elevates by millimeters. “Why? Why has he written that length? Jesus. Good luck! I mean, I’m reading that Jonathan Franzen book. I cannot imagine why it’s 500 pages long. Compression. I just think it comes from common sense, really, accepting that certain things, y’know, that you can easily get bored, and not wanting to bore people. I don’t think it’s any more profound than that. Y’know, when I was brought up? Films were ninety minutes long. You learn that the hard way.” A pause. “Yes.”

You’ve had all kinds of experience with different styles of filmmaking, I say, it’s unlikely you’d be someone to say, oh comedy is harder—”Technically, it’s harder. You have to go into the cutting room with the right material. Yes. It’s just being in a position that you control the timing of things. That’s quite complex and then also you have to have actors who are funny, and can play things in two-shot.”

Does Frears laugh out loud when he reads a script? “If it’s funny.” His large gray eyes are smiling, pursed lips almost. “How else do you test it? If you laugh out loud, you’re okay. You know… laughter is quite simple.”