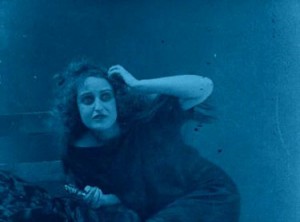 As part of an ongoing project, “Film Ist.,” assembling silent footage from European film archives, Austrian filmmaker-architect Gustav Deutsch’s “Film Ist. A Girl & A Gun” is a lyrical myth about the creation of the world, war and the battle between the sexes. Drawing from the flip epigram, “all you need to make a film is a girl and a gun,” attributed variously to Griffith and Godard, Deutsch works with the emphatic verve of someone born to make image history bloom, as well as with sly wit and a keen eye for the potential fineries of found footage. A little bit Griffith… a little bit Godard. Bill Morrison’s “Decasia” dealt with similar footage in states of distress; Guy Maddin infects his own fever dreams; and Adam Curtis is onto something altogether more punchy.  Yet: image, sound, a hypnotic drone that becomes music: the forgotten history of cinema comprises not one, but many haunted houses. (The explicit bits are drawn from the Kinsey archives.) It’s prize delirium. 93m. (Ray Pride)

“Film Ist. A Girl & A Gun” plays Sunday-Monday and Thursday at Siskel. A fragment from the film is below; maybe not safe for work.