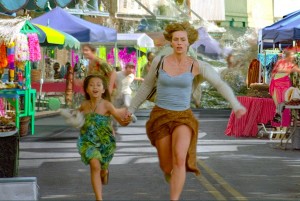 A brawny folly, “Hereafter,” directed by Clint Eastwood at the age of 79 from an original screenplay by Peter Morgan (“The Queen,” “Frost/Nixon”), is much, much less than the sum of its preposterously genteel parts. After taking the assignment, Eastwood, according to Morgan, returned to the screenwriter’s original draft for his thirty-first feature. Two things make “Hereafter” perilously ponderous: its three stories about encounters with the afterlife could have been knit together to greater dramatic or emotional impact; and the images that suggest what-comes-next are cable-television banal, blurred figures on a white plain straight out of the blinding edge of an M. Night Shyamalan put-on. Matt Damon’s a psychic; twin boys in London are neglected by their drug-addicted mother; a French newscaster (the Belgian Cécile de France, “High Tension,” “L’auberge espagnole”) loses her equipoise after being swept away in the Asian tsunami. (The taut yet epic tangle of her blonde curls evokes fond memory of Elisabeth Shue in “Adventures in Babysitting.”) Lazy pacing is accompanied by lots of what used to be called “shoe leather”: in Max Ophüls’ films, an encounter on a stairway is freighted with motion and meaning, emotion and potential. In “Hereafter”? Hallways are bright white, apartments are wells of darkness. “Are you going upstairs? Are you going downstairs? Well, get to it, camera’s rolling, you’ve got one take, that’s a wrap.” Get in the car, get out of the car. Talk some on the street. Stand in front of that vaguely cruciform design element. There are many in-between spaces and moments that amount to little. The sort of moral implications in every image of a film like “The Double Life Of Veronique” are nowhere in this three-part telling of pedestrian foo-foo that never becomes a unified narrative: call this echt Kieslowski “Three Colors: Beige.” What the Polish master did with the sweep of his hand, Eastwood does with a delirious disaster. The opening section is a stunner, a largely eye-level depiction of the crushing weight of a tsunami. (Put that in your sausage and smoke it, Roland Emmerich!) The remainder of “Hereafter” is quite awful, but intermittently adorable in its earnest stumbling. The explanation of a scene that invokes (and reproduces) the July 7, 2005 London Underground bombings is a slash of sentimental stop atop a lovingly crafted bit of oh-too-soon vulgarity. A sustained refrain about the love of Charles Dickens is flatter than the brad-fastened pages of the script. Matt Damon, as a psychic who feels too much, is sometimes glimpsed in shadow, as if playing the younger Eastwood rather than a San Francisco seer. In his 1984 essay, “Chance and Order,” Stanislaw Lem writes about an encounter before he was born when his yet-to-be-father was saved from death by his barber’s intercession with a soldier. “Chance was fate incarnate, for if the barber had happened to pass through that street a minute later my father would have been irrevocably doomed.” That sentence’s swoon is as far from “Hereafter” as where I sit to the moon. In English, French and axiomese. 129m. Widescreen. (Ray Pride)