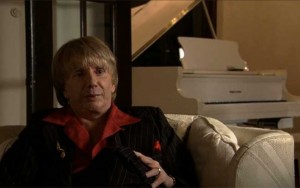 Vikram Jayanti’s compelling singularity of a documentary, “The Agony and The Ecstasy of Phil Spector,” has inspired at least one follow-up, an HBO feature to be directed and written by David Mamet and starring Al Pacino. Mr. Jayanti, take a bow. Jayanti, whose earlier documentary work includes co-producing “When We Were Kings,” and directing “Lincoln,” about Abe’s honest melancholy; James Ellroy’s “Feast of Death”; and “I Am A Sex Addict,” managed to convince Spector to sit for his only extended interview in a fifty-plus-year career. The exchange with Mr. Wall Of Sound was filmed between trials before his 2009 conviction for murdering actress Lana Clarkson, and it’s id, ego and more: it slowly becomes one of the most daring, posturing, naked, revealing slabs of portraiture in an age. It’s an eminently Los Angeles story: the darkness alongside the light. One of Jayanti’s masterstrokes is to alternate Spector’s effusive, paranoiac interview in his mansion with footage from his first trial, which we don’t hear, but instead, hear more than a dozen of Spector’s pop songs in their entirety, his “little symphonies for the kids,” while texts by Spector biographer Mick Brown wax effulgent over the Wall of Sound and the Time of the Teen. The cumulative impact is ravishing, even as we see the older, infirm, dogged, bewigged Spector in the courtroom. And the things Spector says! “I was just a loner and was always treated with contempt; they never considered me with the same respect that they considered Berlin or Gershwin… but that just builds up the anger and the rage which made you do better, made you do a lot better.” And: “I don’t let myself get depressed. Depression is a wasted emotion to me like pity, it’s a wasted emotion.” I first saw the film in the market at the Thessaloniki Documentary Festival a couple of years ago and assumed it could never be shown in the U.S., more for music issues than legal ones. Still, legal issues involving “fair use” of the music will likely prevent any further release of this film; it may be your only chance to see it. It’s an amazing descent into lucid madness and majestic delusion. 102m. (Ray Pride)

“The Agony and The Ecstasy of Phil Spector” opens Friday at Siskel.