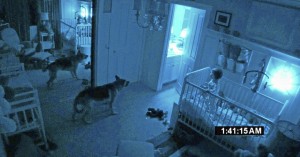 “Paranormal Activity 2” replays the premise of the original: a young couple in a two-story suburban house shoot home videos, then install surveillance cameras with night vision after a suspicious event. Everything on the screen is either recorded by the characters or captured by those fixed cameras. Supernatural bad stuff escalates. Oren Peli wrote, cast, shot and edited “Paranormal Activity.” Now he’s producer and co-writer, with Michael R. Perry and Christopher Landon, of a leaner version directed by Tod Williams (“The Door In The Floor”). The psychic and the de-demonizer who made house calls in the first film are now replaced by a Mexican nanny who soon gets herself fired for all her crucifix-waving and smokey counter-spells. The exposition on ghosts versus demons is reduced to two or three sentences taken from the internet, without even a shot of the helpful site on the laptop, let alone a trip to an underlit library to thumb through a leatherbound tome with medieval etchings. The minimal style also means no scary music and no ectoplasmic spook effects. If there’s a demonic force at home, it’s only visible in its documented effects: TV channels change, doors slam, people move around not by their own will. This entry cynically increases the suspense by adding a baby who makes it to toddler stage, and a family dog that will need a vet. Both can detect presences that do not register on video. The mise-en-scene of “Paranormal Activity 2” employs the classic realism of deep focus, wide angle, long take cinematography. You scan the frame for a tiny paranormal anomaly. Nothing happens minute by minute, night after night. And then out of nowhere, the normal might detonate. Time is elided by fast-forwarding. There are more jumpcuts here than in Jean-Luc Godard’s oeuvre. All the jolts, though, erupt in real-time. There are no cuts or close-ups to shock the eye using traditional devices of the genre. It works. I screamed. I did see names of the cast in the credits at the end but I cannot recall them now and tell you who’s in “Paranormal Activity 2.”  But they’re all pretty good. The dog too. And it’s just the right length. 89m. (Bill Stamets)