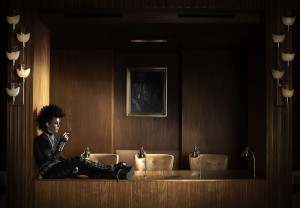 The third of the Swedish adaptations of the late Stieg Larsson’s “Millennium” trilogy of novels, “The Girl Who Kicked The Hornet’s Nest” settles to a simmer, maybe thwarting the expectations of a larger audience who’ve followed both the best sellers and the three films.

Lisbeth Salander, for months now an increasingly favored journalistic topic as the first twenty-first century detective who can be artistically (and profitably) transposed across media and cultures, a knowing splatter of Pippi Longstocking, Sherlock Holmes, punk, hacking and that distant yet observant teen you know who might well be high-functioning Asperger’s.

And it doesn’t hurt that the coiled, charismatic Noomi Rapace has played the role. Still, even with her recent casting in “Sherlock Holmes 2” and a studio vampire project, as well as a possible role in Ridley Scott’s “Alien” prequels, it seems a longshot to suggest, as indieWIRE blogger Anne Thompson has, that these violent, emotionally grueling imports could get Rapace an Oscar nod. In “The Girl Who Kicked The Hornet’s Nest,” Salander’s worst adversaries are brought to justice, but without the fire and firepower of the earlier entries. Rapace is called upon to reflect more than brood, contemplate more than glower. In weeks of rehab after the shooting that ended “The Girl Who Played With Fire,” Lisbeth has to recover physically but also observe as the stakes are raised around her: as the legal noose tightens on the elderly Swedish men with much to hide, she’s abed, largely restricted to emoting with flickers, her long black hair newly shifted in volume, “punk” off to one side where she was shorn to remove the bullet. Rapace “acts” more than kicks ass, and within the tawdry confines of the last two Swedish versions, it’s weirdly thrilling yet likely either semi-comprehensible or less intriguing to the unconverted.

After seeing “Hornet’s Nest,” the general subject of expectations rumbled about. I’d noticed a handful of writers recently who described their experiences of a film from the base of ever-variable expectations of what they expected the movie to be before they saw it. (A formula for certain boredom, ingratitude and the onset of critical yaws and yawns.) A colleague’s comment about “Unstoppable,” which neither of us has seen, fell into the same patch. I’m content to watch more of Tony Scott’s late-career play with painterly near-abstractions, wild color design, varieties of velocity. “Sometimes I need a movie to be more than that,” was the reply. I just said I didn’t know what that could mean: I’d love more but I know what I admire about this man’s bending of movie form to something that could also rate for painterly acumen in a gallery setting. (Scott and Julian Schnabel have used grain, focus, jitter and green-to-gray palettes to similar effect.)

It’s a subject that I wished I hadn’t gotten so fixed upon, some platonic ideal of what a film could be and expectations, and wanting all films to subscribe to the same mirage, as talking about it again, with some distracting vigor, walking down the street later at night led me to overlook a modest slick of midwestern puke on the sidewalk: slip, topple, shatter. As I lay on my back, measuring the damage, a friend says, “Isn’t that where the boulder lands on Franco’s arm in ‘127 Hours’?” Why, yes, just above the NERRRRRRRRRRRRRR…! When that typing hand recovers, it will have only empathy, no expectations about the apparent truth of that rock and a dull knife.

Painkillers now allow me to recall the ending of “Hornet’s Nest” (and the trilogy) fondly. The pair parting tentatively, shyly, like Truffaut teens instead of the adults who had witnessed and experienced such violent muck. Lisbeth retreats to her fairytale throne, the bay window seat that looks over the bay at dusk of central Stockholm, where most of the films’ locations are legibly sited. It’s her panopticon, it’s her city, and she is its all-seeing eye. This is brushed in, in a couple of uninflected shots, but comes as low-key release for anyone who’s been transfixed by her character. She has found her place: above the waspy fray, above, not removed, from “the men who hate women” and themselves.