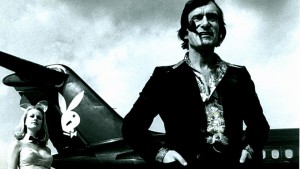 Even two jam-packed hours is hardly enough to introduce the range of civil-liberties issues championed by 1950s Chicago’s pseudo-sybarite Hugh Hefner over the course of half-a-century of needling the “squares” to whom he doubtless felt superior. Money from the foundation that grew from the flood of money that once flowed from his titular magazine has done much good in the fields of free speech, civil rights and  other important issues. While Brigitte Berman’s bustling Canuck hagiography covers the estimable parts of the Midwest-shaped Hefner’s life; leave it to later for “Hugh Hefner: Playboy, Hedonist, Cosplayer.” There’s enough of that with the general upbeat tone and content like the slimy, condescending bullshit of Gene Simmons being lavished on viewers as virile wisdom rather than puerile persona jerkiness. With disciples like that, you can’t turn around and immediately sell saintly piety for the Silk-Robed One. With Joan Baez, Tony Bennett, Pat Boone, Jim Brown, Susan Brownmiller, James Caan, Dick Cavett, Tony Curtis, Dick Gregory and wall-to-wall female nudity. 124m. (Ray Pride)

“Hugh Hefner: Playboy, Activist and Rebel” opens Friday at Siskel. A Friday night screening with Berman and the octogenarian publisher is sold out.