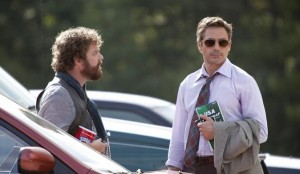 Director Todd Phillips (“The Hangover,” “Road Trip”) pairs Zach Galifianakis, playing an aspiring actor carrying his father’s ashes in a coffee can, and Robert Downey Jr., playing an architect on the verge of fatherhood. Galifianakis’ Ethan Chase (aka Tremblay, as he captions his headshots) arrives at the Atlanta airport in a station wagon that tears off the door of Peter’s (Downey) town car. Ethan knocks over Peter’s luggage and accidentally switches their rollaway carts. They’re on the same flight, with seats one row apart. As he shoves his luggage in the overhead compartment, Ethan jams his gut into Peter’s face. When Ethan yammers about “bombs” and “terrorists,” an increasingly irate Peter tries to shut him up, only to get himself shot with a rubber bullet by an air marshal. The TSA puts both on the “no-fly” list and they’re off to Los Angeles in a rented Subaru Impreza. The screenplay, credited to Alan R. Cohen & Alan Freedland and Adam Sztykiel & Phillips, concocts a series of interstate clashes between the travelers, all hooked to the annoying idiocy of Ethan. The baby he carried in “The Hangover” is replaced by Sonny, a French Bulldog that masturbates with his forepaw. “He thinks he’s human,” chortles Ethan. “So stupid.” Peter is the straightman, yet he is set up for antipathy. All backlash and push-back, he’s supposed to make his nemesis lovable. Peter is the one who sucker-punches a little Alabama brat in the stomach, mocks a “hick” Iraq vet in a Western Union office, and spits in the face of Sonny. “Due Date” delivers above-average genre comedy as a road movie with vintage rock selections, as well as a buddy movie about multi-challenged males and their endearing deficits. With Michelle Monaghan, Juliette Lewis, Jamie Foxx, Danny McBride, RZA, Matt Walsh. 100m. (Bill Stamets)