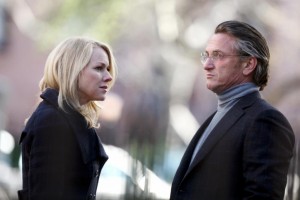 In 2005, Doug Liman directed “Mr. and Mrs. Smith,” a comic action-thriller about spouses who kept secret from one another their employment as assassins by two secret agencies. Now Liman directs and shoots “Fair Game,” about another suburban couple who are really players in a geopolitical game. Valerie Plame Wilson (Naomi Watts) and her husband Joe Wilson (Sean Penn) have their own secrets to keep, but no kills to tally. Their real-life counterparts penned books—hers was “Fair Game: How a Top CIA Agent Was Betrayed by Her Own Government” (2008) and his was “The Politics of Truth: Inside the Lies that Led to War and Betrayed My Wife’s CIA Identity” (2004)—that inform a topical screenplay by John-Henry and Jez Butterworth. Valerie was indeed a covert CIA officer in the counter-proliferation department and headed the Joint Task Force on Iraq. Joe, a former ambassador turned consultant, was dispatched to Niger to investigate reports that Saddam Hussein purchased yellow-cake uranium for nuclear warheads. His report did not fit the disinformation tactics of the Iraq-invaders running the White House, so he published an op-ed column in the New York Times. In retaliation, his wife was outed. It wrecked their careers and their kids cried. At times “Fair Game” approximates the fact-based impact of this year’s “Green Zone,” another weapons-of-mass-destruction drama based on a 2006 book by the Washington Post’s former Baghdad bureau chief. “But Fair Game is not meant to be a purely historical document or political polemic,” states producer Bill Pohlad. Instead of exposing a criminal administration—”Does the president have the power to declassify information?” asks a dirty trickster—”Fair Game” opts to empathize with a marriage under stress. Although the end credits advise that “some of the characters portrayed and the names used herein are ficticious,” someone redacts part of the names of ten characters. With Ty Burrell, Sam Shepard, Bruce McGill, Brooke Smith, Noah Emmerich, Michael Kelly, David Denman, David Andrews. 106m. (Bill Stamets)