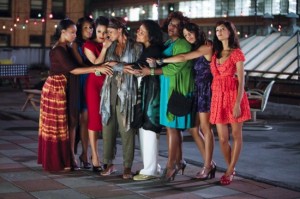 Tyler Perry jumps from the preachy therapy of his uplift comedies to a more literary fare by adapting the darker “For Colored Girls Who Have Considered Suicide When The Rainbow Is Enuf.” Ntozake Shange first performed her “choreopoem” with four friends in 1974 at a Berkeley women’s bar. A year later she staged an off-Broadway version that moved to Broadway in 1976. Tyler adds narrative threads of melodrama that culminate in a group hug on a Harlem rooftop. A crane shot frames the strong cast arrayed for a curtain call. From Perry’s broad output like this year’s “Why Did I Get Married Too?” you do not expect performances this powerful. The stage origins, however, are everpresent in impassioned monologues that come along like the numbers in a musical. In “The Color Purple” (1985) and “Precious” (2009), a knot of sexual trauma was bound in one body and soul. “For Colored Girls” redistributes all that hurt among nine African-American women, two more than in the original. The effect is markedly less experimental than “I’m Not There,” where six actors played one character, and “Palindromes” where there were eight. As a 1970s period piece, “For Colored Girls” scores more sisterly feminism than Henry Jaglom’s eighties and nineties exercises in listening to underloved women overcome patriarchy. Perry does right to those done wrong. With Janet Jackson, Loretta Devine, Michael Ealy, Kimberly Elise, Omari Hardwick, Hill Harper, Thandie Newton, Phylicia Rashad, Anika Noni Rose, Tessa Thompson, Kerry Washington, Whoopi Goldberg. 134m. (Bill Stamets)