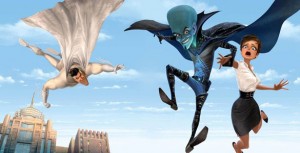 Tom McGrath (the two “Madagascar” animated features) directs smart kid stuff with Hegelian super-heroics and a get-the-girl saga. The first 3D effect comes with the Dreamworks Animation logo of a boy fishing upon a crescent moon: he casts his line straight into the audience, as if to snag our eyeballs with his hook. The rest of “Megamind” imagines spectacular civic spaces for Metro City. The 3D seems designed to enhance instead of hammer. Two interstellar babies with superpowers crash on our planet. The white one rolls through the gates of an estate and gets a privileged upraising. The other one, with blue skin, lands behind bars at a prison “For the Criminally Gifted,” where he’s adopted by convicts. They later meet at ‘Lil Gifted School, where the former uses his superpowers as a show-off do-gooder and the latter is a chronic failure at mainstreaming, so he repurposes his super-human cerebellum for inventive villainy. Metro Man (voiced by Brad Pitt) is the beloved savior of Metro City for reliably foiling his perpetual nemesis Megamind (Will Ferrell), who keeps kidnapping TV reporter Roxanne (Tina Fey), who Metro Man keeps rescuing. It’s a Sisyphean routine that continues after Metro Man busts out of super-lockdown while serving eighty-five life sentences. But when Megamind apparently kills Metro Man and takes over “Metrocity,” as he always mispronounces “Metro City,” he loses his will to do evil. What’s a nemesis to do without his antithesis? Just invent a new über-do-gooder. Megamind, who’s grown fond of Roxanne while cloaking himself in a white-skinned avatar, must do a deeper reboot as the good guy to save the day. Bad guys never get the girl in this genre, as he keeps reminding himself, until he realizes that he’s smart enough to rewrite his fate. For once the young woman is characterized without the usual career-versus-romance quandary. Credit “Megamind” writers Alan Schoolcraft and Brent Simons for that welcome touch, as well as Megamind’s way of saying “szhool” for “school.” Not since “Half Nelson” (2006) has there been so much dialogue about dialectics. With voices of David Cross, J.K. Simmons, Ben Stiller, McGrath. 90m. (Bill Stamets)