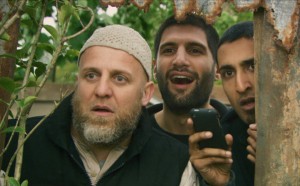 Chris Morris’ reputation as a savage satirist rests partly on his “Brass Eye” Channel 4 series mocking sensationalist television, which demonstrated brass balls with a 2001 episode about pedophilia. What on earth could you tackle to topple that reputation? Terrorism? Incompetent want-to-suicide bombers in contemporary Britain? Morris is lucid in interviews about the range of his reading about perpetrators past, but even readers with the most cursory knowledge know how much depends on fortune and how much ought to fall to fate in the planning stages. The blackest of Pynchon-meets-Kubrick comedies could be made of what the 9/11 killers were doing in the weeks before that morning. Absurdity compounds absurdity. Stupidity short-circuits nihilist “ideals.” The history of terrorists’ fuck-ups would shame the big boys of “Jackass.” Of the Yemeni printer-cartridge caper of last week, Morris told Boing Boing, “Look, the cartridges that were bombs, that were intercepted in the FedEx parcel bombing attempt last week—the guy who made those bombs turned his brother into a bottle rocket last year. That whole group are basically displaced Saudis in Yemen. They don’t like the Saudis. This guy wanted to blow up a Saudi prince. He persuaded his brother to use a suppository bomb. The suppository bomber turns up at the Saudi prince’s place, says hello to the Saudi prince, pulls out a trigger, fires off the bomb, then blasts himself vertically, straight through the ceiling. The Saudi prince picks himself up and says, ‘Right, now then, where was I?’ And that’s the end of that. It’s a perfect sight gag. For everyone other than the guy’s mother, it’s a funny story.” While this tells you nothing literally about “Four Lions,” it’s a terse summa of Morris’ intelligence and brute wit. His movie is savage, brutal, erratic, hilarious, damning, inconsistent, absurdist, offensive, splendid, thrilling, mocking, awful and wondrous and cold. Movies as bold as this and “In the Loop,” engaging the terrible real, are too rare. With Benedict Cumberbatch, Julia Davis, Chris Wilson, Kevin Eldon, Will Adamsdale, Preeya Kalidas, Riz Ahmed, Craig Parkinson, Danny Ashok, Nigel Lindsay. 102m. (Ray Pride)