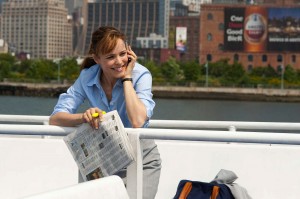 “Morning Glory” begins with Becky (Rachel McAdams) fired from “Good Morning, New Jersey” and ends with a bid to work for NBC’s “Today ” show. In between, our plucky executive producer runs the fourth-rated “Daybreak” at “ibs,” a network with low self-image etched into its lower-case initials. Fourteen e.p.’s have passed through in the past eleven years. Her challenge is to reconcile the estranged co-anchors: Diane Keaton plays a former Miss Arizona who does fluff and Harrison Ford plays a former evening anchor with “gravitas” and all the Emmys, Peabodys and a Pulitzer to prove it. Director Roger Michell (“Notting Hill,” “Venus”) and writer Aline Brosh McKenna (“The Devil Wears Prada,” “27 Dresses”) put on a good show that works without taking any chances. The backstage satire of TV is soft. As a self-pitying sourpuss, Ford is his usual crusty, crinkly loner but nothing more. He will go from using “abrogated” on the air to using “fluffy” in a cooking segment when he prepares a frittata. Becky will gradually discipline her girly bangs for an Audrey Hepburn look. Although she stars in what’s presented as a “romantic comedy,” her romance with another producer is irrelevant. This occasional sex partner always defers to her Blackberry. At least her careerism is left unpunished by the plot as she boosts ratings. In “State of Play” McAdams’ character at a D.C. daily bootstrapped from blogger on the “personal relationships in the political sphere” beat, to investigative reporter alongside a grouchy hard-drinking old-school pro played by Russell Crowe. As TV news characters go, she’s more like associate producer Mary Tyler Moore in the seventies TV show or Holly Hunter’s producer in “Broadcast News” (1987), but nothing like Faye Dunaway’s producer in “Network” (1976.) “Morning Glory” is easy-viewing, just like a morning program minus commercials. With Patrick Wilson, Jeff Goldblum, John Pankow, Adrian Martinez. 102m. (Bill Stamets)