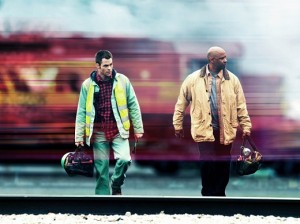 Director Tony Scott has a knack for kinetic man–machine action. This time it’s an unmanned thirty-nine-car freight train accidentally let loose from a train yard. Picking up speed with a load of combustible toxic chemicals, this imminent disaster is heading for an elevated tight curve in the middle of a Pennsylvania city. “Unstoppable” belongs to a genre that makes a spectacle of competence with a clock ticking. Here the seasoned Scott (“The Taking of Pelham 123” and fourteen other features) and screenwriter Mark Bomback (“Live Free or Die Hard”), a relative rookie, pair railroaders Frank (Denzel Washington, in his fifth role for Scott) and Will (Chris Pine). It’s their first shift together. Frank has been doing this for twenty-eight years. Will has been on the job just four months. (That’s more training than Pine’s Kirk got before taking the helm in last year’s “Star Trek.”) The match-up in “Unstoppable” parallels the old-hand and new-hire working together in last year’s “Up in the Air.” Demoralized workplaces and devalued expertise are overlapping themes. Frank and WIll go full throttle to lasso the iron horse. Part of the narrative craft in this locomotivated chaser is the workmanlike attention to speed, time and distance. All the ideas come from below, not management. The suits, even the exec calling the shots from a golf course, get dissed less than usual, despite making bad decisions and threatening to fire Frank, Will and other employees looking out for more than the company’s bottom line. The film is straightforward about the blue-collar screw-up at fault for this day-long crisis, partly based on a 2001 incident in Ohio with forty-six train cars. (An end title reports he has found work in the fast-food industry.) Other characters know what they’re doing, including a yardmaster (Rosario Dawson) and a federal safety inspector (Kevin Corrigan). Hands-on wisdom about equipment enables working-class heroics. Although Scott defaults to formulaic excess with TV news choppers and high-velocity convoys of sheriff and state trooper cars with flashing lights and sirens set on “stun,” there are no red wires-versus-blues wire to be cut. With Kevin Chapman, Ethan Suplee, Kevin Dunn, Lew Temple. 98m. (Bill Stamets)