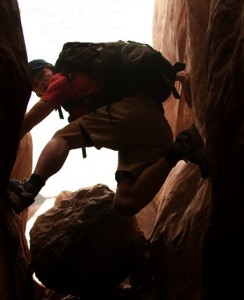 “There is something greater than the life of the cities, greater than money and possessions; there is a manhood that can never be taken away. For this, one gives everything,” rhapsodizes James Salter in his 1979 novel, “Solo Faces.”

In Danny Boyle’s outlandishly entertaining “127 Hours,” rock climber Aron Ralston is less thoughtful: biking and rock climbing in the Utah wilds, his solitary pursuit brings him to a pinnacle of self-damage and self-discovery: a rock falls, his arm is pinned and, the title tells you in its own optimistic way, just how long this passage will take this inventive man (as embodied, first with adrenaline, then with fear and finally with a kind of enlightenment by the extraordinary, mercurial James Franco). Boyle’s visual ideas fizz and fly, the score and sound design are hyperstylized, and the result is almost insanely upbeat. Plus, many viewers will already know, as in a Greek tragedy or even “Titanic,” what’s going to happen. [What happens is discussed below.] What will have to go through Ralston’s mind to find his way out of this self-inflicted disaster. Talking to Boyle last month about his gorgeous, giddy, unlikely movie, I say, it’s even a light film.

“I always wanted to do it in that way,” the writer-director tells me, leaning closer, “I always thought, when I read it, when I read his book, which obviously is the starting point, apart from hearing the story, I found the chapters in the canyon exhilarating. I didn’t like the other chapters at all, where he was talking about his upbringing and his background story and stuff like that.”

Ralston was nervous about trusting the director of “Trainspotting” and “Slumdog Millionaire.” “When I first met him, he was not even nervous; he was just completely blocked. He didn’t want to know about this approach. He wanted to do it as a documentary where he kept control. But when I met him again in 2009, he was nervous about giving us the freedom to do it and I said, well listen, the only way to have a decent film is if you let us tell the truth through a certain amount of fiction. And I said, if you tell it all through fact, it won’t work. And I said, most especially, you won’t arrive at a point where you can tolerate him cutting his arm off. People will walk out. But I said, if you put people in a position where they’re on that journey with him. And they feel like they’ve been with him the whole time, and not with you, Aron, they’ve been with James Franco,” Boyle says in his charming, speedy patter. “‘Cos that’s the other thing I said to him, I said, y’know. when you cast an actor… you want to do a dramatized documentary, because you want to cast someone who looks like you… but you never see him, because you keep him at a distance. I said, you’ve got to commit to someone and they become you. But I want us to watch James Franco go through what you went through and he’s called Aron Ralston, and he is Aron Ralston, and it is your story, but isn’t told through a slightly different medium, which is me James and the cameramen and y’know and on we go. To give him his credit, he did, he agreed, not reluctantly, but with reservations, but he appreciated it by the end, I think. And it’s the way to get at the story best.”

The feat of Franco’s performance in “Howl” earlier this year, begins with mimicry but ends with him inhabiting Allen Ginsberg. As Ralston faces nature and himself, he performs similar admirable feats. “He’s a very clever guy,” Boyle says. “He gives the impression of being stoned the whole time and, like, half asleep? He’s as sharp as anything. And he picks up things so fast. I was amazed at that. And it is a front, that stoned thing, to keep everybody at bay. That’s what he’s doing, he’s sussing you out even though you think, ‘Does he know I’m here?’ He’s kind of sussing you out. Yeah… I liked him a lot.”

So “127 Hours” is the Sisyphus myth as a Western. “Yeah. A man and a rock.” One man against the landscape except the John Ford horizon is above him. “Yeah, slightly outside, obviously. The weird thing about it is, what we tried to do, deliberately, we tried not to do the… What I didn’t want to do is what you’d normally do, which is every three minutes you cut away to a landscape shot and show, y’know…” Like relentless establishing shots in a movie that break any sort of psychological tension. “I agree, I agree. And even more so, I thought, because [Ralston] can’t see any of this. All he can see is the sky, he’s got the blue sky—he could be on top of a building, in a box on top of a building, because he just can’t see anything. I thought. Why should we be doing all that the whole time? You’ve got to try and as much as possible make it an immersive, first-person experience that you go through.”